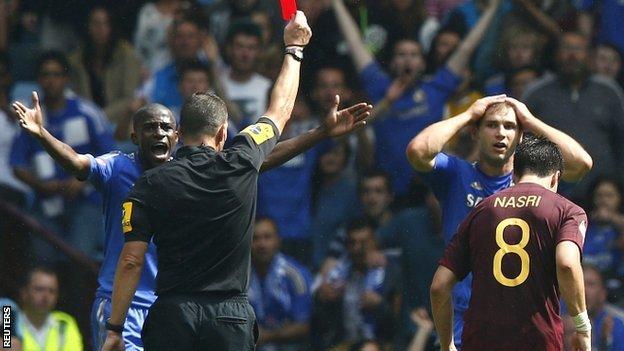 The Blues were 1-0 ahead when Ivanovic was sent off for a tackle on Aleksandar Kolorov, but went on to lose 3-2.

"It changed the game in favour of Manchester City," said Di Matteo. "We competed very well and at that point were in the lead.

The Italian, who guided the Blues to Champions League and FA Cup success last season, added of the 40th-minute incident: "The challenge had no intent to hurt the opposition. It was a sliding tackle and he got the ball as well.

"Sometimes a red card is given in those circumstances, sometimes it is not. But there was no intention to harm the opponent."

Manchester City manager Roberto Mancini agreed that the decision of referee Kevin Friend to show Ivanovic a straight red card was a significant factor in the outcome of the match.

"With the sending-off, it was difficult to see from the bench but it is an advantage to play with an extra player," said Mancini.

"It had an impact on the game. It is impossible to say no because 11 versus 11 is different. But we played better than Chelsea, played better football."

And Di Matteo was pleased with the impact made by his summer signing.

"He was lively, caused a few problems and had a couple of opportunities," said the former West Bromwich Albion boss. "We saw glimpses of his quality and he will be a big success for us."