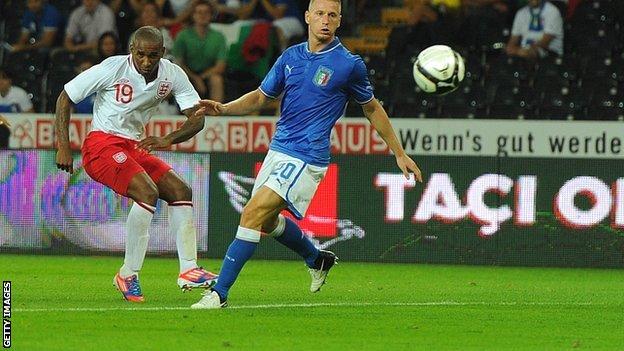 Jermain Defoe came off the bench to score a superb late goal and earn England victory over their Euro 2012 conquerors Italy.

Italy started strongly with Daniele De Rossi giving them the lead when he headed in Alessandro Diamanti's corner.

But Roy Hodgson's side replied, also from a corner, Phil Jagielka sending his diving header in on 27 minutes.

The game looked like petering out, but after Ryan Bertrand cleared off the line, Defoe struck on the counter.

Spurs striker Defoe had plenty to do when he was fed by James Milner, but having turned on the edge of the penalty area, he checked inside Ignazio Abate and smashed a shot past Salvatore Sirigu 11 minutes from time.

For Hodgson, it turned what appeared to be a promising evening in Switzerland into a very pleasing one, meaning he has yet to lose a game in open play after seven games in charge.

And with a new-look line-up including only Ashley Young from the team that lost to Italy in the European Championship quarter-finals, there were encouraging performances all over the pitch as Hodgson tweaked his formation from 4-4-2 to a more fluid 4-2-3-1.

But they were guided by a mature midfield cast of Lampard and Michael Carrick, who quietly linked play, before Defoe made an almost immediate impact after coming on to score his 16th goal for his country.

It took the jolt of De Rossi's opener for England to find their rhythm and 19-year-old Butland, who became the youngest goalkeeper to win a full England cap despite having only played as high as League Two, had to be sharp to deny Italy on several occasions.

Nevertheless, 12 minutes after the Roma midfielder headed in from Diamanti's corner, clever work from Adam Johnson led to a corner for England and Lampard's delivery found Jagielka, who stooped low to guide his header in from eight yards for his first senior England goal.

That seemed to settle Hodgson's side. Skipper Lampard, who missed Euro 2012 because of a thigh injury, twice had thumping shots at goal before he fired a free-kick just over.

Ruddy, who also missed the European Championship through injury, replaced Butland at half-time and had to deal with a resurgent Italy as he too adjusted to international football.

He passed his first test well, though, saving to his right from Mattia Destro's effort. Cesare Prandelli's young side then twice wasted good chances soon after.

Having gathered some momentum, Italy were then disrupted by a flurry of substitutions on the hour mark and they almost went behind as first Gary Cahill had a goal disallowed, before Federico Peluso nearly scored in his own net from James Milner's free-kick.

Defoe's strike came immediately after a threat on Ruddy's goal, substitute Bertrand clearing off the line, before Milner led the counter-attack. Once he fed the Spurs striker, Defoe turned, cut inside and unleashed a fearsome shot into the top corner.