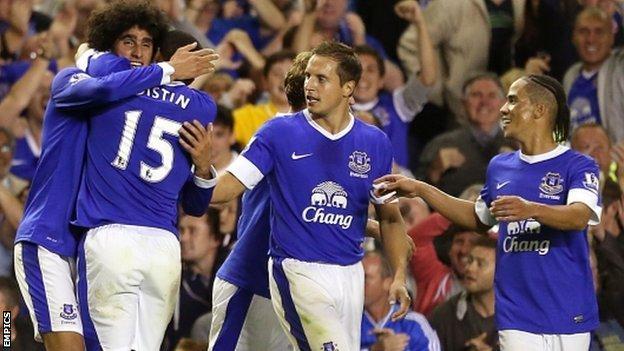 Sir Alex Ferguson's £24m signing from Arsenal emerged as a 67th-minute substitute - but he made a quiet introduction and was powerless to prevent United starting the Premier League season with a defeat - their first since they lost at Chelsea in 2004.

And it was fitting that Everton's winning goal came from the outstanding Marouane Fellaini, who tormented Manchester United's makeshift defence throughout a thunderous evening on Merseyside.

The giant Belgian's towering 57th minute header from Darron Gibson's corner finally ended the defiance of United keeper David de Gea, who had kept Everton at bay with a series of outstanding first half saves.

Leon Osman also struck the crossbar - and when Van Persie was finally introduced Everton had an iron grip on the game and only looked like conceding the advantage Fellaini had given them when Phil Jagielka cleared off the line from Tom Cleverley.

Everton have traditionally been slow starters but in this opening game they dominated United for spells, with keeper Tim Howard only being troubled by the occasional effort from Wayne Rooney.

Goodison Park celebrated the victory noisily at the final whistle, leaving Ferguson to contemplate a lacklustre performance undermined by a reshuffled rearguard in which Michael Carrick never settled in his role as emergency central defender alongside returning captain Nemanja Vidic.

"Manchester United were the better side in the second half by a long way. But Everton for their first-half display, and for the way they defended in the second half, just about deserved it. I think this is the season when if anyone's going to get close to the top four, it's Everton."

United were without Rio Ferdinand, Phil Jones, Chris Smalling and Jonny Evans - and how Everton exploited the weakness.

Ferguson eased Van Persie into life at Old Trafford with a place on the bench, entrusting attacking duties to Rooney and England youngster Danny Welbeck.

United were grateful to keeper De Gea for a performance of defiance and athleticism that kept his side on terms as they were terrorised by the power and presence of Fellaini.

The young Spaniard stretched to turn over Steven Pienaar's header then dived to turn away the South African's shot as Everton applied pressure. He did even better to save Osman's shot on the turn and leap to claw away a free-kick from Leighton Baines that was destined for the top corner.

United had opportunities of their own but they were rarities, Howard saving twice from Rooney and Welbeck rolling a low shot wide as United claimed a penalty when he tangled with Jagielka.

United's biggest escape came just after the interval when Fellaini once more headed into the path of Osman, who did beat De Gea but held his head in anguish as his effort rattled the crossbar.

Everton were not to be denied and finally got the lead they so deserved. The source was no surprise as Fellaini - who had simply been too much for Carrick - rose above him to power in Gibson's corner.

United gave Everton their most anxious moment after 66 minutes when Jagielka cleared off the line from Cleverley and seconds later Van Persie entered the fray in place of Welbeck.

However, with Jagielka and Sylvain Distin magnificent, Everton were in no mood to see their resistance broken and they claimed a win their efforts merited.

Everton manager David Moyes: "I'm really pleased because we performed ever so well. We've often started the season slowly but just because we've won one game doesn't mean we've had a good start - as it would not have been a bad start had we lost.

"Marouane Fellaini is a really good player. We can play him behind the striker, in the middle or because of his power in the air we can play him as a defensive one as well.

"The only time we had a really good start here we ended in the Champions League places. I don't know if that's possible but it would be nice for us not to be playing catch up.

"David de Gea made some great saves. In the build-up it was all about Manchester United and what they could do - I felt people called that wrong because we are a tough team to beat at Goodison Park.

"We defended really well when we had to. Phil Jagielka was outstanding."