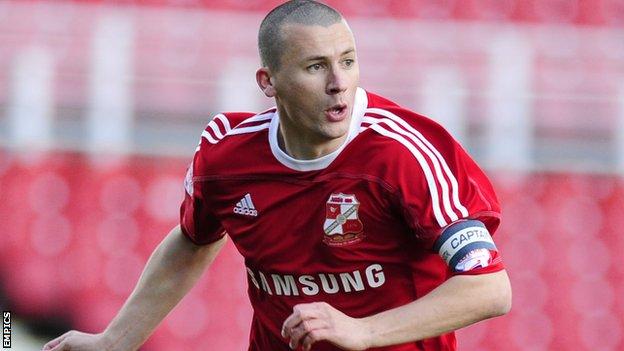 Defender Paul Caddis has been removed as captain at Swindon Town.

The 24-year-old was named skipper in October, replacing Oliver Risser, who had failed to make an immediate impact at the County Ground.

This will come as a huge surprise to Swindon fans.

Caddis was an integral part of the club's success last season and was viewed behind the scenes as the perfect man to lead Town.

This decision will no doubt leave the Scotsman smarting and it remains to be seen what the future now holds for him.

Caddis played 50 games last season and lead his side to the League Two title.

But manager Paolo Di Canio informed the Scotsman on Friday that he would be stripping him of the armband and that fellow defender Alan McCormack will now take over the role.

"My captain must deliver my words, value and principles to the rest of the dressing room," Di Canio told BBC Wiltshire.

"Macca is the perfect example of this."

Caddis was brought to Swindon from Celtic in the summer of 2010 by former Town manager Danny Wilson.

The former Scotland Under-21 international, who became a regular in the side, was initially made vice-captain following the arrival of Di Canio, before being promoted three months later.

Caddis was rewarded with a contract extension this summer, to keep him at the club until 2014.