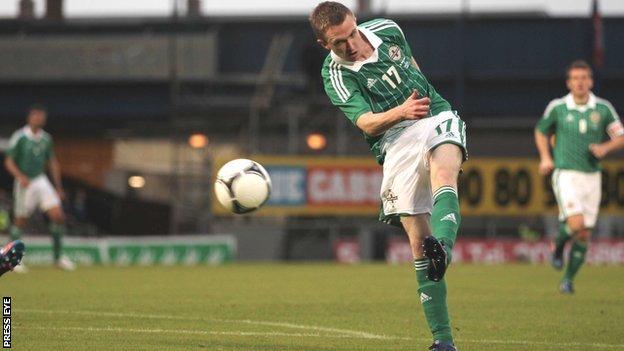 A Shane Ferguson volley and near-post finish from Kyle Lafferty put the hosts 2-0 ahead, but Finland were soon level.

Tim Sparv headed in before Teemu Pukki pounced on a Chris Brunt error to equalise after 24 minutes.

A superb free-kick from Perparim Hetemaj gave Finland a deserved lead but Paterson levelled six minutes from time after winning the spot-kick.

There was a tribute to former Northern Ireland captain Alan McDonald, who died in June, before the game started on a quick surface following heavy afternoon rain.

Ferguson's excellent opener, a sweetly struck volley from Dean Shiels' deflected cross, was his first international goal and also the first for boss Michael O'Neill since he took charge.

Lafferty made it a perfect start for the hosts when he nipped in to steer a Shiels cross onto the net.

However, the Windsor faithful had little time to enjoy the lead as the Finns hit back with two quick goals.

Sparv pulled one back on 22 minutes, his fine header from Kari Arkivuo's cross hitting the top corner.

Brunt gifted Finland their equaliser, with Pukki intercepting the midfielder's backpass before poking past the advancing Roy Carroll.

Njazi Kuqi twice shot wide as the visitors provided the greater threat for the remainder of the half.

Finland gained a grip on affairs after the break and went close when substitute Riku Riski blazed just over.

Lafferty was presented with a rare opportunity for Northern Ireland but his low shot was easily saved by Niki Maenpaa.

Joona Toivio wasted an excellent chance by glancing a header wide at the backpost from Jere Uronen's inswinging cross.

Gareth McAuley came to the rescue when he cleared Riski's goalbound effort a yard from the line after Carroll was beaten.

Nothing could stop Hetemaj's free-kick, his strike from just outside the box rocketing into the net after hitting the angle of crossbar and post.

An equaliser looked unlikely but Paterson converted from the spot after being tugged by Tovio as he ran on to a pass.

It was a patchy performance from Northern Ireland but scoring three goals will provide some confidence ahead of the opening World Cup qualifier against Russia in Moscow on 7 September.