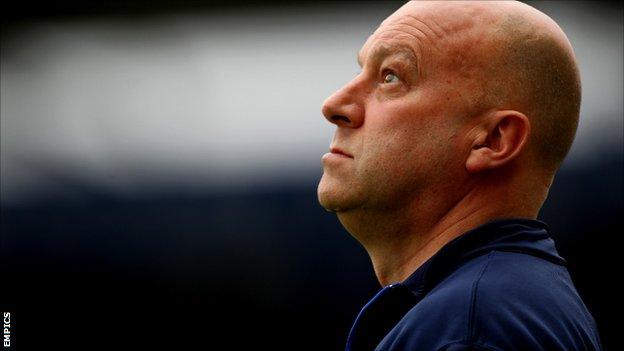 Hartlepool United coach Neale Cooper described the 5-0 Capital One Cup defeat by Crewe Alexandra as the "worst" defensive display he has seen.

Pools were 4-0 down at half-time and conceded a late fifth to exit the competition at the first round stage.

"That was one of the worst defensive displays I've seen in my life," Cooper told BBC Tees.

"They've been given both barrels in the dressing room because that was garbage today, that's not good enough."

Cooper continued: "It's a part of our game that has been really strong, but to be embarassed like that is horrendous.

"I'm embarassed, and they ought to be, I'm the first to praise them and I look after them as much as I can but the back five looked as though they had never met each other."

"There's no one more upset than me, I was confident of a really good start and we got blown away," the Pools boss added.

"These things happen, I didn't see that coming today but it's come and hopefully that's the only one.

"It was our own fault, we couldn't keep hens out of our close as we say in Scotland, and they have to bounce back.

"We've got a big game against Swindon next week, but if we defend like that then we've got no chance."