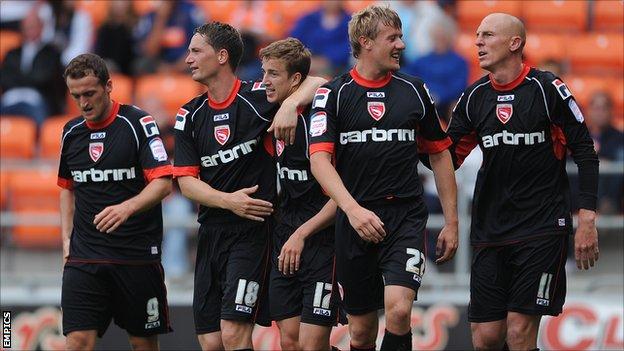 Jim Bentley has described his Morecambe players as "heroes" after knocking Blackpool out of the Capital One Cup.

The League Two side, two divisions below Blackpool, won 2-1 at Bloomfield Road in Sunday's first round tie.

"If you going to win at Blackpool, you're going to need heroes," Bentley told BBC Radio Lancashire.

"We knew we'd have to ride our luck and people would have to put their bodies on the line. I'm overwhelmed for everyone who has played their part."

With a comparitively small budget, Bentley has acknowledged that the Shrimps will not be among the favourites for promotion from League Two this season.

"It's a difficult League Two programme, but we've proved that we've got a little bit of everything," said Bentley.

"We've got great togetherness, we've got an honest bunch that work hard, they're disciplined. Every time they put that shirt on, they give it their all."

Blackpool manager Ian Holloway gave no excuses for the defeat, adding: "I wasn't expecting that with the team that I put out there.

"Well done to Morecambe. They had two chances and scored two. We had more than that and didn't take them."