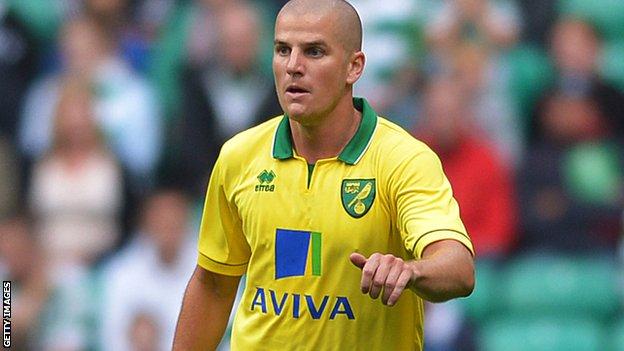 Full-back Marc Tierney is determined to re-establish himself in Norwich's first team after a lengthy spell on the sidelines because of injury.

The 26-year-old last appeared in a competitive match nine months ago but has now recovered from groin surgery.

He played all 90 minutes of a 2-0 home defeat by Borussia Moenchengladbach, their final pre-season friendly.

"It's really good to be back in the mix and hopefully get that starting position," he told BBC Radio Norfolk.

"It was really tough from playing every game to not playing until the end of the season.

"During that time, you're trying everything you can to get back but it was just a torn adductor that didn't show up on a scan.

"But (I want to) look for the positives now. It's been done, I'm fit again, I had a great pre-season.

"It's been really tough but I've enjoyed every minute. Normally you don't look forward to it but I couldn't wait for it to come round."

Tierney was brought to Carrow Road from Colchester in early 2011 by former manager Paul Lambert, now in charge at Aston Villa.

He has only made 31 starts for the club and says his injury lay-off had made him appreciate being a Premier League player even more.

"I thought I appreciated it before I was out, but there won't be a moment that passes by when I don't remember to take it all in and do my best for the club so that everyone remembers my name," he added.