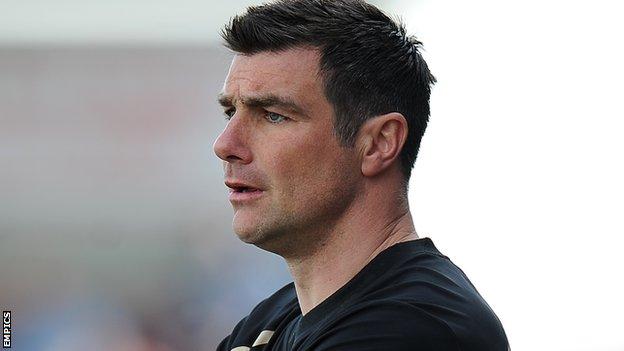 Crawley Town manager Richie Barker is looking to add to his backroom staff.

The 37-year-old took over at the Broadfield Stadium last week after leaving fellow League One side Bury.

He told a BBC Sussex fans forum: "I am looking to bring one person in. We've started the ball rolling.

"It's always going to be difficult when you get used to working with certain people and trust them. I like people who are professional, work hard and know what the job is."

Meanwhile Reds chief executive Alan Williams says that Barker will be given funds to strengthen his squad before the transfer window shuts at the end of the month.

No club has achieved three back-to-back promotions. Who knows, we could be history-makers

"The budget that has been set for this season is larger than it was for last season," Williams told BBC Sport.

"It's quite well placed within the league and what we know other clubs have got.

"It's not the best but it's not the worst. We've still got a little bit of room for some additions in there.

"We are working tirelessly to add to what I believe is already a great squad."

Coach Craig Brewster and director of football Steve Coppell had been in interim charge at the West Sussex club after previous manager Sean O'Driscoll left to join Nottingham Forest.

And Barker says he has enjoyed working with Coppell since taking up the post at Crawley.

"It's quite daunting for someone who has only been a manager for 12 months to have Steve Coppell working alongside you," he said.

"But his standing within the game and his contacts are second to none.

"Every now and then I'll mention a player and throw the manager's name in and Steve will say 'Right, I'll give him a call then'.

"He's a fantastic person for me to learn from."

You can listen again to the Crawley Town fan's forum via the BBC Sussex iPlayer for the next week.