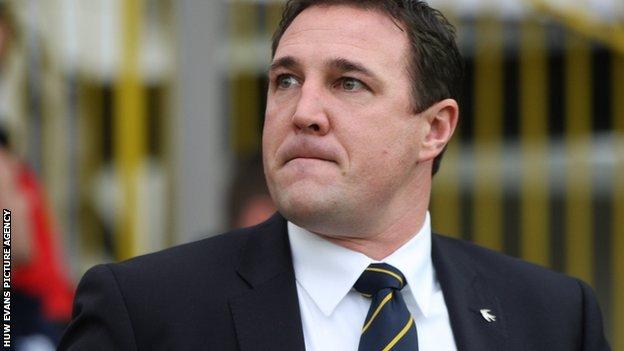 Manager Malky Mackay says Cardiff City have been lumbered with a "bizarre" schedule to start the new season.

Cardiff will start the new Championship season at home to Huddersfield Town on Friday - two days after eight of their players play international friendlies.

"We've been pulled from the Saturday to the Friday night so there's less recovery for the guys who are flying home from all over Europe," he said.

"It's truly bizarre for the opening game of our season."

Before starting their league campaign, Cardiff will begin the season away to League Two side Northampton on Tuesday in the first round of the Capital One League Cup.

But Mackay says he will be forced to field a severely weakened side at Sixfields Stadium because of the club's international commitments.

Craig Bellamy, Rob Earnshaw and Darcy Blake have linked up with the Wales squad to face Bosnia-Hercegovina in Llanelli; David Marshall and Don Cowie are away with Scotland; Aron Gunnarsson is away with Iceland; Etien Velikonja has met up with the Slovenia national team and Filip Kiss is with Slovakia.

"It's going to be a young team going up to Northampton, through circumstances rather than lack of respect," said Mackay, who guided Cardiff to the final of last season's competition before falling to Liverpool in a penalty shoot-out.

With so little time for his internationals to recover before Friday's Championship opener, Mackay said it would have been "easy" for him to prevent a number of them from playing for their countries in Wednesday's friendlies.

Rather than taking that approach, Mackay has asked all the relevant international managers to be sympathetic to Cardiff's situation.

"It's easy for me to pull all my players out injured," he said. "Very rarely is the Fifa rule invoked when they ban them from playing for their clubs the week after [if they have missed an international].

"You need co-operation from clubs so I'm aware of that. It's not something I want to do.

"But at the same time, especially with it being a friendly, I just think there needs to be a level of common sense attached to it and that's what I've asked for."

The manager says he is still in the market for more signings, but revealed Portsmouth midfielder Liam Lawrence was not one of his targets.