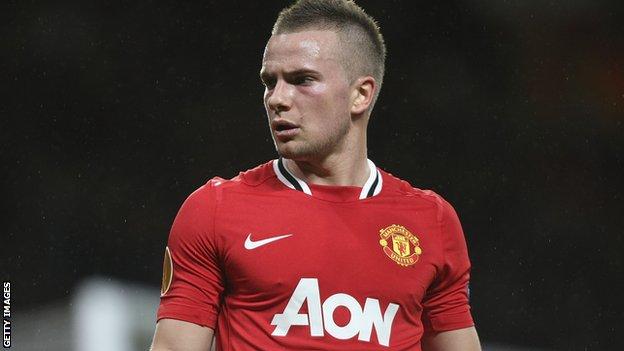 Tom Cleverley admits he faces a defining season as he looks to establish himself as a regular for both Manchester United and England.

Cleverley was hampered by foot and ankle problems last term, but hopes to win his first England cap in Wednesday's friendly against Italy.

"It's a big season for me." he said. "I want to play as many games for United and England as possible."

Keeper Jack Butland also hopes to win his first England cap at the age of 19.

Manager Roy Hodgson could field an inexperienced side in what will be England's first match since they lost to Italy on penalties in the European Championships in the Olympic Stadium in Kiev seven weeks ago.

And Cleverley, who turned 23 on Sunday, is determined to take his chance should he make his senior international debut.

He is feeling sharper than ever after a productive pre-season that has seen him play six games in total for Team GB at the Olympics and United.

"I suppose every season is a big year at United, but maybe there's a little bit extra for me personally," Cleverley added.

"I didn't manage to get my match fitness back towards the end of last season. Obviously it was a frustrating season for me.

"I'm hoping to train well and win my first cap. It's always an honour to play for your country and I was delighted to be called into the squad."

Meanwhile, Butland could win his first senior cap without having played a game higher than the fourth tier of English football.

With Manchester City's Hart ruled out, the Team GB keeper travels to Switzerland knowing he could end up adding a full international cap to his four Olympic appearances.

"If I get the chance it will be a dream come true," Butland, who has yet to make a first-team appearance for his club, Birmingham, said.

"It's something I can't stop thinking about. I'd love the chance to perform on that stage on Wednesday."