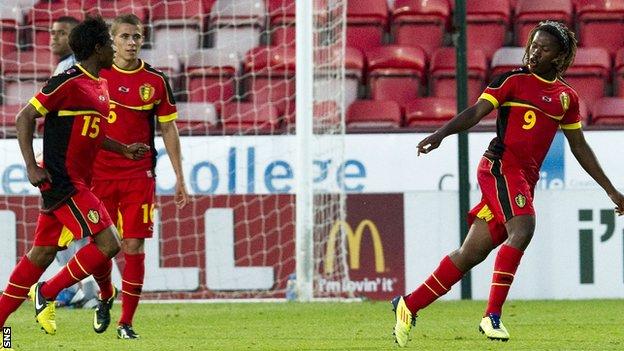 Hearts goalkeeper Mark Ridgers was carried off with a knee injury as Scotland Under-21s suffered a friendly defeat against Belgium.

Ridgers was injured in a first-half collision as he slid in to gather the ball at East End Park.

Tottenham's Jordan Archer replaced Ridgers on 42 minutes and was beaten by a clinical strike from Ziggy Badibanga.

Liam Kelly came closest for the Scots with a shot narrowly wide from 30 yards in injury-time.

With St Mirren's Grant Adam out with a leg fracture, Archer could be called on for the team's final two qualifiers for the Uefa Under-21 Championship against Luxembourg and Austria early next month as Billy Stark's side look to stay in the top two places and seal a play-off spot.

With Jordan Rhodes starting for the full international team against Australia and Dundee United pair Gary Mackay-Steven and Johnny Russell injured, Stark was without the front three who started the previous match, a 2-2 qualifying draw in Bulgaria.

Rhodes has scored eight of the 11 goals in the qualifiers and Scotland lacked a cutting edge against well-organised visitors.

Most of the first-half action took place in midfield with the visitors having slightly more possession but little penetration.

The only efforts of note were both deflected strikes. Stuart Armstrong saw his shot loop into the visiting goalkeeper's hands while Hannes van der Bruggen was closed down quickly as he shot from 22 yards and his effort was diverted wide.

Ridgers was hurt when he came off his line and slid in to intercept a through ball at the feet of Thomas Meunier.

Scotland, with Stoke midfielder Jamie Ness on for Scott Allan, were looking the more assured side in the early stages of the second half but Archer was beaten in the 57th minute.

Anderlecht striker Badibanga took a short pass from Thorgan Hazard and spun away from Scotland's central defence before dispatching a left-footed shot into the bottom corner from 20 yards.

Hazard, who joined older brother Eden at Chelsea this summer from Lens, then won a free-kick 20 yards out following a mazy run.

The 19-year-old took the kick himself and curled the ball towards the bottom corner but Archer got down well to push the ball away.

Belgium were looking increasingly dangerous in attack and Archer made another good stop from Dolly Menga's 25-yard strike.

However, the Scots did manage some late pressure. Belgian keeper Koen Catsell blocked a ball into the danger area from Celtic striker Tony Watt, who came off the bench for his debut, and Kelly's shot whistled wide.