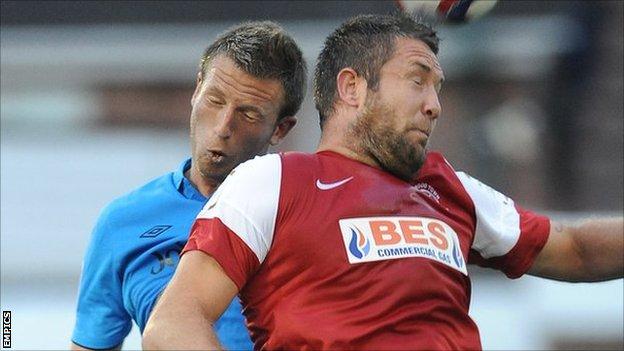 Manager Micky Mellon was a proud man after seeing Fleetwood Town play their first match as a Football League club.

Fleetwood lost 1-0 to Championship side Nottingham Forest in the first round of the Capital One Cup on Monday.

"We deserve to be staging games like this because we've worked so hard over the last few years," Mellon told BBC Radio Lancashire.

The Blue Square Bet Premier champions play their first match in League Two at home to Torquay on Saturday.

Dexter Blackstock's second-half header proved to be enough for Forest to progress, although Mellon believes his team held their own against a team two divisions above them in the Football League pyramid.

"The biggest tribute I can pay to my players is that anyone coming here not knowing the two teams, you wouldn't have said there was two levels between them," he added.

"Sometimes we probably shaded it, without creating loads and loads of chances.

"We'll take the lessons from this game and we'll make sure it makes us a better team. We'll take a lot of pride in knowing that, for large periods, we matched Nottingham Forest."

"We're still learning to play with each other," continued Mellon. "There were times when we should have expected Jon Parkin to win some of his headers and maybe have gambled on that.

"There were times where we could have made an extra pass to create a scoring chance, but that's all about learning how to play together as a group."