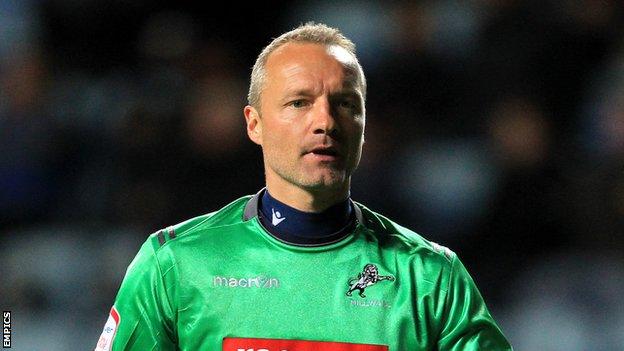 Millwall goalkeeper Maik Taylor says the club's fans will be crucial to their hopes in the Championship.

The 40-year-old, who signed a new one-year deal this summer, helped the Lions to 16th place last season.

He told BBC London 94.9: "It's going to be a difficult season this year, much tougher than last year.

"We've not got the biggest budget in the Championship so we will need every one of the fans to get behind us and drive us along."

He added: "I played the last 10 games of last season and the fans are unbelievable.

"The New Den is always an intimidating place to go and when things are going well for us, the fans can really lift us and see us through some games."

Taylor joined the south London club on loan in March after a frustrating spell at Leeds United, where he failed to make a first-team appearance.

"I've all the respect in the world for Neil Warnock but when there's only five subs he never puts a goalie on the bench," Taylor continued.

"I'd gone there on the back of an injury so I knew I wasn't going to be straight in the team but when Neil came in there wasn't a place for me on the bench.

"I had a phone call off [Millwall boss] Kenny Jackett and it was a bit of a surprise but we're all professionals and want to play."