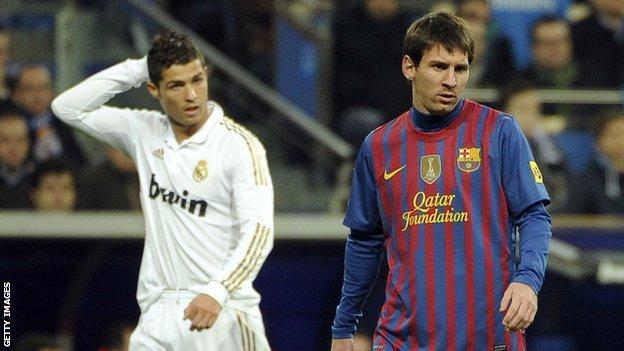 Lionel Messi and Cristiano Ronaldo will go up against each other again for Uefa's Best Player in Europe award.

Last year's winner Messi is joined in the final three by Barcelona team-mate Andres Iniesta, while Real Madrid's Ronaldo makes it two years in a row on the shortlist.

The winner will be announced on 30 August in Monaco on the same day as the Champions League group stage draw.

Bangor City's Les Davies did not make the final round.

The 27-year-old winger was a surprise inclusion on the original 32-man list.

A single nomination, believed to be from a Welsh journalist, was enough to earn Davies's place on the 32-man list, but he did not make the final cut.

Messi, current Fifa Ballon d'Or holder for the world's best player of 2011, was the clear winner of the European award last season with 39 votes. Xavi was second with 11, while Ronaldo managed just three.