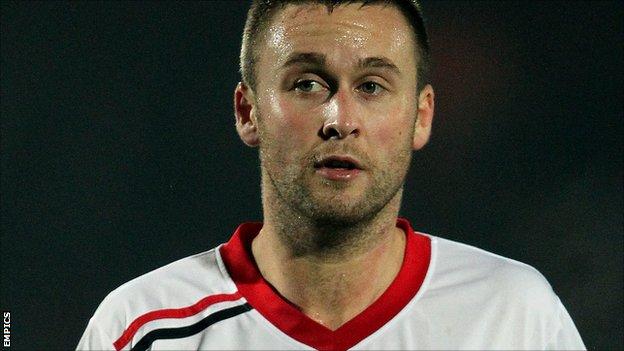 Preston's new signing Joel Byrom has admitted he nearly gave up football after slipping into non-league.

Midfielder Byrom dropped into the eighth tier of English football in 2007, signing for Clitheroe after being released by Accrington Stanley.

He has fought his way back into the Football League, having questioned his future in the professional game.

"I really did consider just getting a job and playing for fun," the 25-year-old told BBC Radio Lancashire.

"Accrington wasn't really a good time for me. I didn't play much.

"Then Clitheroe came along and Northwich just after that. It put a smile back on my face and I started enjoying my football again.

"It's a bit of a strange one that I ever considered it (giving up) now I'm back at this stage. Preston's a huge club and I can't wait to get started."

The former Blackburn Rovers trainee went on to join Stevenage, where he won successive promotions from the Blue Square Bet Premier to League One under Preston boss Graham Westley.

Former Stevenage team-mates John Mousinho, Scott Laird and Chris Beardsley have all linked up with their former manager during the summer break.

Byrom had been training with North End for the majority of pre-season before signing a deal on Sunday.

A hamstring injury prevented him from making his debut in the Capital One Cup first round victory against Huddersfield, although he is hopeful of being fit for Preston's first league game at home to Colchester.

Meanwhile, Danny Mayor and Jamie Proctor are set to leave the club.

Both players expressed a desire to leave Deepdale at the end of last season and have spent time training with Blackpool.

Winger Mayor is discussing a move to Sheffield Wednesday, while striker Proctor is in talks with Swansea City.