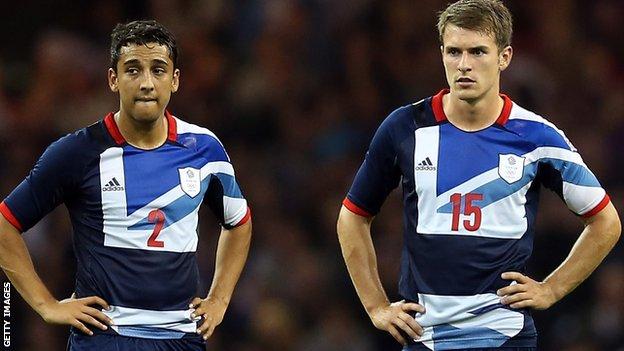 Wales manager Chris Coleman is pleased a Great Britain football team will probably not play at the next Olympics.

Five Welsh players played at the London Olympics despite opposition from the Football Association of Wales.

The general secretary of the Football Association, Alex Horne, has said it is "unlikely" the team would be resurrected for Rio de Janeiro in 2016.

"I don't lose any sleep over the fact we won't be having a Team GB in the next Olympics," Coleman said.

"Where my country's concerned I think it's better off for us in the long run that everything resumes to the way it was and there isn't going to be any extra games to play."

Stuart Pearce's side lost on penalties to South Korea in the quarter-finals at the Millennium Stadium in Cardiff.

Allen, Bellamy, Ramsey and Taylor are in the Wales squad for the friendly against Bosnia-Hercegovina in Llanelli, and Coleman believes they have benefited from their Olympic experience.

"There was a lot said about the Olympics and we've been there before but it's worked out well for us," Coleman said.

"Playing pre-season friendlies is one thing, when you're playing tournament football it's more serious.

"Tournament football - training everyday [and] building up to serious games - is a completely different level to training two or three times a week and playing an hour in a friendly game.

"It's a shame they got knocked out in the quarter-final but it's given them a little rest.

"It's worked out OK for us as it goes, because the guys are fit. They enjoyed the experience [and] are in a good frame of mind."

Wednesday's friendly with Bosnia-Hercegovina is Wales' final match before their World Cup qualifying campaign begins against Belgium at Cardiff City Stadium on 7 September.

But Coleman defended both players and stressed he had no concern over their commitment to the national squad.

"Mickey's paid to give his opinion and the beauty of football is we don't always have to agree - and I don't agree," Coleman said.

"Jack Collison's had a serious problem, not for six months, not for 12 months, we're talking maybe two or three years.

"We know Jack very well. He's got a lot of desire for football and he loves to come and play for Wales and we love having him play for Wales.

"If he can't play for West Ham how can he come and play for us?

"James Collins has got a possible hernia problem that may need surgery. He can't play.

"He limped off in a friendly in Portugal for West Ham so he can't play.

"I certainly don't doubt the commitment of Jack or James."