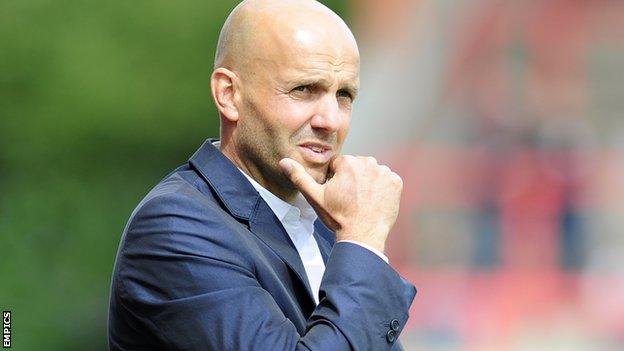 Exeter City manager Paul Tisdale wants clarity over the rules on handball after his side were beaten 2-1 by Crystal Palace in the Capital One Cup.

City were a goal up before Tommy Doherty was penalised for a handball in the box and Jermaine Easter scored the resulting spot kick.

It led Palace to mount a fight-back as Kagisho Dikgacoi got the winner.

"It's hard for me to criticise the referee on that because the rule is so grey," Tisdale told BBC Radio Devon.

"It was a very soft way for them to get back into the game," he added.

But Tisdale was very happy with the way his new-look side acquitted themselves against Championship opposition.

Four players, Jordan Moore-Taylor, Doherty, Kevin Amakwaah and Aaron Davies, made their competitive debuts for the club as they prepare to begin life in League Two after relegation last season.

"I think we played really well and I'm really, really disappointed to have lost.

"I think the team did fit, I've said to them that they looked like a team, we covered good areas.

"We're not going to be scintillating quite yet, we've got a long way to go to get some fluency in our passing, but as a team we looked well set, hungry and determined.

"As a manager who's setting up a new team I can't be too disappointed, we certainly put enough pressure on their goal."