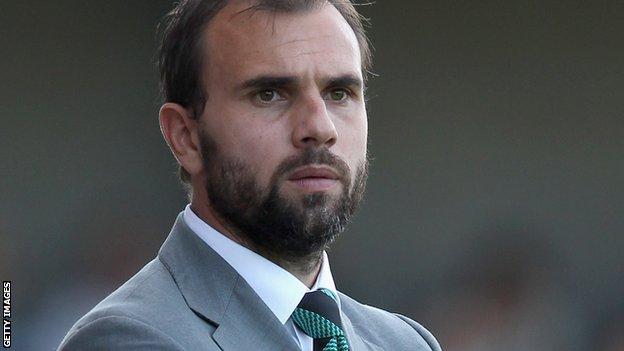 Plymouth Argyle manager Carl Fletcher paid tribute to struggling Portsmouth after his side beat them 3-0 in the first round of the Capital One Cup.

Pompey fielded nine teenagers after releasing all their senior players as they bid to avoid liquidation.

Argyle went through a similar spell of financial turmoil a year ago and Fletcher hopes a solution can be found.

"Fingers crossed they can get something sorted out sooner rather than later," he told BBC Radio Devon.

At the end of the day you can only do what you need to do in terms of the game, it was a potential banana skin we had to get through

"They need to get it done properly so we've got Portsmouth around for many years to come.

"It's not so long ago that we were going through the same stuff and we feel for everyone that works at the club.

"There were some real quality players in there and we know what a tough a time they're going through and they were a real credit to the club.

"But at the end of the day you can only do what you need to do in terms of the game, it was a potential banana skin and we had to get through it and move onto Saturday," he added.

Argyle's win was notable for the absence of new striker Rhys Griffiths, who joined from Welsh Premier League side Port Talbot last week.

"He got injured in the last couple of seconds of training," Fletcher said.

"It was a real big blow for us, Rhys has been hungry for this and he's really down about it.

"But we'll make sure he gets right and back as soon as possible."