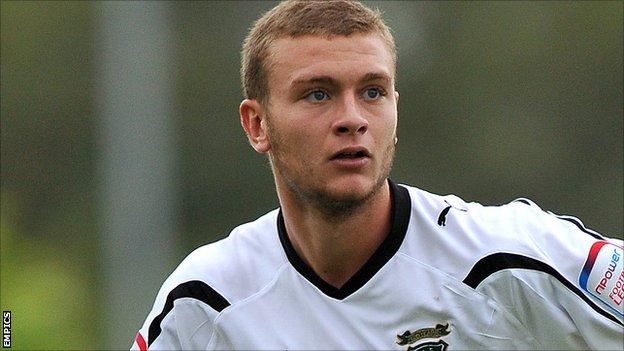 The 19-year-old's loan move to Prenton Park was confirmed just hours before Tranmere's 2-1 win against Chesterfield in the Capital One Cup on Tuesday.

Gibson said: "I knew I was coming down the night before, but there didn't seem much sense to go down to Tranmere and then come back to Chesterfield.

"It just shows the team spirit that a stranger can come in and get by."

He added: "I introduced myself to the lads [before the game] and they've all been brilliant with me since the moment I walked in so I can't thank them enough."

With injury robbing Tranmere of defenders Ian Goodison, Mark McChrystal and Paul Black, manager Ronnie Moore chose to play Gibson alongside full-back Michael Kay in the heart of the Rovers back line.

And the decision paid off, with Abdulai Bell-Baggie's extra-time goal securing a spot in round two.

Tranmere open their League One campaign at home to Leyton Orient on Saturday, and after loan spells in League Two and the Blue Square Bet Premier last season, Gibson is hoping to progress his career further in the third tier.

"I had two loan spells last year at Plymouth and York and I learned an awful lot from them.

"This is League One, it's a step up, and I hope I can learn a lot more to take back to Middlesbrough. But, just at the moment, I'm concentrating on doing a good job for Tranmere."