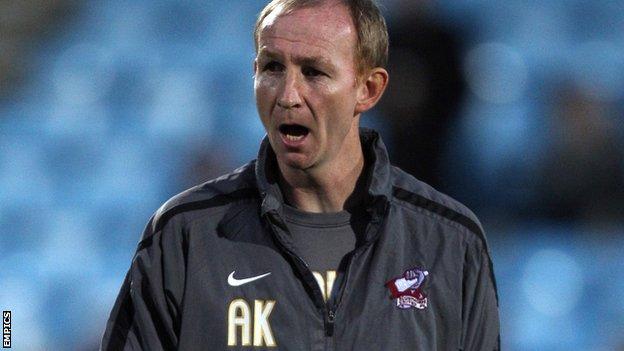 The Iron beat their Championship opposition 7-6 on penalties after coming back from 4-1 down to draw the match 5-5.

"It really was horrible for me to watch from start to finish," he told BBC Radio Humberside.

"It feels like December already. I've never been involved in anything like this in my whole career."

He continued: "The formation really didn't work for us in the first half and we thought about sticking with it, but as soon as we went 4-1 down we just had to go for it."

Knill's side were 3-0 down at the interval and went 4-1 down just a minute after Andy Barcham had pulled one back.

Mike Grella and Bobby Grant made it 4-3 but Rams forward Nathan Tyson restored their two-goal lead with less than 10 minutes to go, before Connor Jennings and Grant scored in injury time to send the game to extra-time.

Despite the exertions, Knill is confident the game will not have any adverse effects on his players ahead of their first league game of the season against Crawley on Saturday.

"It's the start of the season, you shouldn't be tired after one game at this stage," he added.

"We're a strong squad with young, fit athletes and we'll need to be firing on all cylinders at the weekend because Crawley are a good side."

The Iron were knocked out of last season's competition in the second round by Newcastle, losing 2-1 in extra-time, and were beaten 5-2 by Manchester United at the third-round stage the year before.