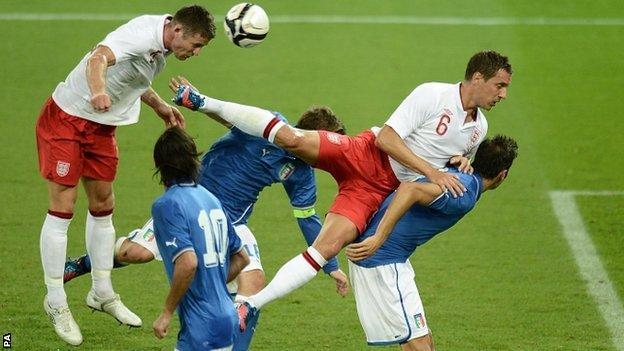 This was the international friendly no-one wanted.

An inconvenience three days before the new Premier League season, a meaningless distraction, a pain.

And yet England's 2-1 victory over a similarly youthful Italy side felt like a step in the right direction, a chink of light after the gloom of Euro 2012.

There were promising debuts from Tom Cleverley, Ryan Bertrand, Jake Livermore and the two goalkeepers, Jack Butland and John Ruddy.

"Roy has used this friendly to look to the future and to give young boys an opportunity. It wasn't the greatest of games but it felt like a small step forward."

Jermain Defoe's thunderous late winner was a reminder of what the Tottenham striker can contribute at international level, while Michael Carrick's calm reassurance in the England midfield marked a significant staging post after more than two years in the wilderness.

England's rigid 4-4-2 had been pedestrian and predictable in Poland and Ukraine. Manager Roy Hodgson had been accused of using an antiquated system that had been too easily exposed by Europe's more sophisticated sides. Against Italy in Berne, England switched to 4-2-3-1 and immediately discovered a fluidity long absent.

The central axis of Cleverley, Carrick and Frank Lampard had a blend of youth and experience - a hint of the future but not at the expense of the past.

"There was a balance," former England manager Graham Taylor said.

"Roy recognises the quality of some of the older players and he knows that he will need them in the qualifying campaign ahead.

"But he also realises that he has two years until the next World Cup in Brazil and that he has to build for that now. He has got a long-term strategy and there were plenty of signs against Italy that will have pleased him."

It would be foolhardy to get carried away on the basis of one result but in Berne there were indications that he recognises the need for change.

England took better care of the ball, in contrast to the meagre 36% of possession they had against Italy in June, when their best passing combination was Joe Hart to substitute Andy Carroll.

Manchester United midfielder Cleverley was closely shackled throughout but still provided further evidence to enhance his burgeoning reputation, as Hodgson experimented with a more expansive playing style. There was intelligence and rhythm to his passing, coupled with a willingness to track back to help his team-mates throughout.

"I think they were unlucky to lose him so early [to injury last season] and I think they will be pleased to see him back and in form playing for GB at the Olympics, and playing very well, and it must be terrific for him to add now to that with a good performance with the England first team."

In goal, Butland and Ruddy proved England do now have strength in depth between the posts. Butland, whose only senior football came on loan at Cheltenham Town from parent club Birmingham, broke Billy Moon's 124-year-old record to become England's youngest goalkeeper at 19 years and 158 days.

Norwich keeper Ruddy, meanwhile, twice came to England's rescue with point-blank saves in the second half.

Kyle Walker and Adam Johnson forged a promising partnership down the right flank while Leighton Baines was a solid presence on the left.

"Roy will be very satisfied with what he has seen," Taylor added.

"He will have learned something about these players. Roy has used this friendly to look to the future and to give young boys an opportunity. It wasn't the greatest of games, but it feels like a small step forward."

The picture will start to become clearer when England take on Moldova and Ukraine in their first World Cup qualifiers next month.

At Euro 2012, England displayed a graft and obduracy that was just enough to match the paltry pre-tournament expectations. But against Italy on Wednesday there were signs of progress that might just make the country grow to like its football team again.