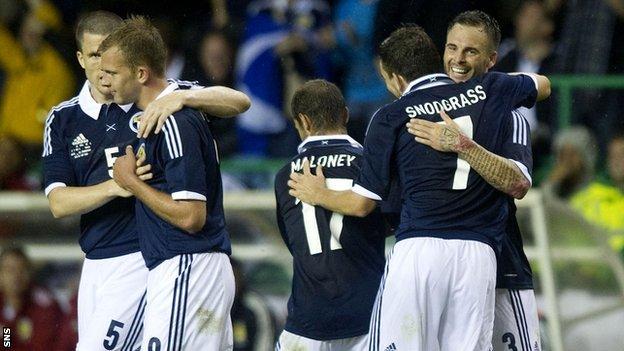 It was no showstopper in Festival city as 11,000 hardy souls braved the Edinburgh downpour.

But there was sunshine on Leith for Scotland as their 3-1 victory over Australia shone like a beacon of light after a summer of dark days for the nation's football community.

Scotland coach Craig Levein had midweek bemoaned the infighting that had followed the financial collapse of Rangers, engulfing every senior club in Scotland - and the national governing bodies - in intrigue.

He hoped his players could help lift the gloom, provide some unity and, in the unlikely surrounding of Easter Road, they delivered.

Australia arrived as a side 22 places above the Scots in the world rankings and smarting from three games without a victory after a run of six wins in seven.

Levein needed to restore some confidence - if not some credibility - after May's 5-1 humiliation by the United States.

As David Weir, who recalled Australia's 2-0 win in Scotland in 2000 in the match programme, warned: "Australia don't do friendlies."

Their showdown in Edinburgh was no place for fringe players.

Levein, making eight changes from their USA trip, fielded what he considered his strongest-available side.

However, Danny Fox was handed only his second cap at left-back, while Jordan Rhodes earned his debut up front.

Fox went some way to making the troublesome left-back spot his own as the Southampton man's crosses led to Scotland's first two goals.

However, Rhodes stole the headlines with a fine finish that levelled the scores and will no doubt have a few more top-flight clubs pondering a move for the striker whose goals propelled Huddersfield Town to promotion from League One last season.

The still boyish 22-year-old himself still seemed overawed by the occasion, afterwards repeating his mantra that he still has much to learn at this level.

Levein again stressed that veteran Kenny Miller, absent because of club duties in Major League Soccer, was his number one.

There will, though, be many who will see Rhodes as the star striker in the mould of Denis Law and Kenny Dalglish for which Scotland has long been waiting.

They hope to emulate the achievements of sports like cycling and rowing in targeting fresh talent that for them led to Olympic gold.

It is an idea pioneered in Australia.

Scotland has spent a summer fearing for its future should Rangers' demise undermine further the quality of its domestic football.

It can look at Australia for inspiration. A much larger nation that struggles to find enough clubs for its professional top tier.

Its top players are scattered around the globe, playing for unheralded outfits in the likes of Qatar and Uzbekistan.

Yet they are regulars at World Cup finals and presently lie 24th in the world rankings.

Should Scotland's new performance schools have the same impact as those in Australia, in future years Levein's successors might not need to have to rely as much on unearthing English-born players like Rhodes and Fox to match them.