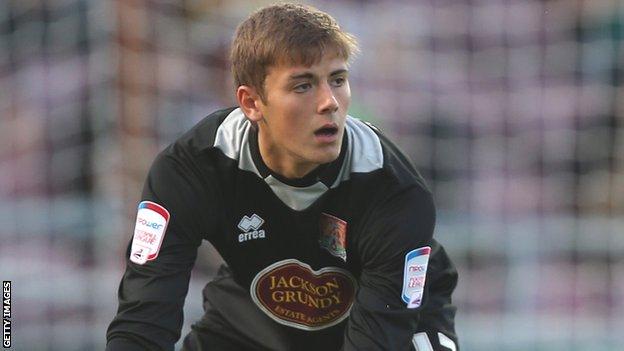 Northampton Town manager Aidy Boothroyd says he is delighted with his goalkeeping options.

Dean Snedker, 17, made his debut in the win over Cardiff City but Wigan loanee Lee Nicholls is set to play against Rochdale on Saturday.

Shane Higgs is expected to return from injury in October.

"I'm thrilled with the goalkeeping situation, from being really concerned about it four weeks ago," Boothroyd told BBC Radio Northampton.

"We've got a senior goalkeeper well on the way to fitness and he looks in great shape.

"Lee has been impressive from the start - he's a terrific talent with a lot to offer.

"And we've got young Dean who's come into the team and shown every aspect you'd want from a goalkeeper.

"We'll keep his feet on the ground and he's here on a long contract so he can develop.

"We might be in a position in six months time where we need to get this kid in the team or out on loan somewhere. That's a nice position for me to be in."

And Boothroyd believes his side will take time to reach their peak.

"We do know that we can get better and I don't think we'll see the best of this team until we get into the new year," says Boothroyd.