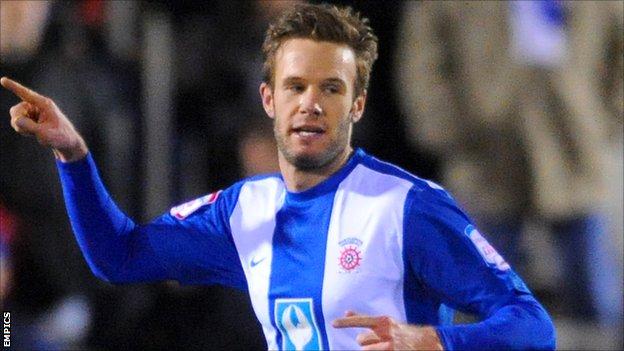 Monkhouse and his team-mates were made to analyse the game in training, tough viewing for the Pools squad.

"We can't crawl under and accept that sort of performance, there's one we can go and that's up."

He added: "We've seen the video, we've gone through mistakes, and hopefully we can learn from it."

Pools' thrashing at Gresty Road was a blow following some optimistic displays in pre-season, including a 1-0 win against Premier League side Sunderland at Victoria Park.

However Monkhouse has faith in the strengthening Neale Cooper has made during the summer in a bid to improve on last season's 13th-place finish.

"We want to get in and around the play-offs," Monkhouse said.

"There's a chance for most teams in this division to get in there, it's down to performances, the ones who perform week-in week-out.

"Hopefully with the players we've brought in and those we've got, we can do that.

"It's been said on a few occasions we didn't score enough goals last season and the teams up top have goalscorers.

"We've brought Steve Howard in, hopefully he can score a few and if Tony Sweeney and me can pop up with some goals, if we score as many goals as we can, then we had a good defence last year and can build on that."

Pools begin their League One campaign with Swindon the visitors to Victoria Park on Saturday, with commentary on BBC Tees DAB from 1400 BST.