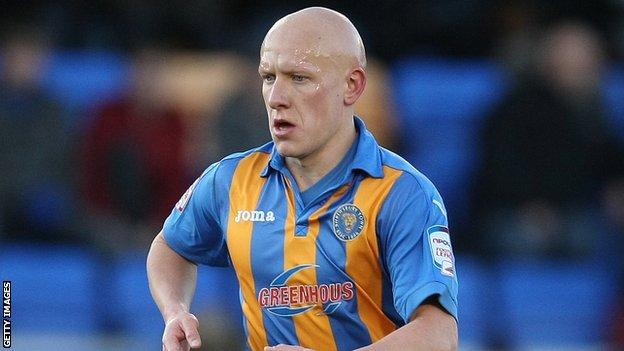 Shrewsbury Town captain Matt Richards says being given the armband for the new season came as a "nice surprise".

Richards has taken over from Ian Sharps, who led the side to promotion to League One last season but has since joined Rotherham.

"It was a nice surprise," he told BBC Radio Shropshire. "[Manager] Graham Turner didn't give an inkling to who he was going to approach.

"So I'm thrilled with it and really looking forward to it."

To lead the team out is a bonus, and I can't wait to get the season underway and achieve something in League One.

The 27-year-old defender was named both Shrewsbury players and fans Player of the Year last season, but admits that he has learned a lot from his predecessor about how to deal with his new responsibilities.

"I've never been club captain before so its a bit new to me, I'll be taking a few things from Sharps who did a tremendous job," Richards said.

"He's a born leader and he knows what he's doing on and off the pitch.

"On the pitch I'm fine, it's off the pitch that will be a bit confusing for me."

And after finishing their preparations ahead of the new campaign, Richards said he was itching for the League One new season to get underway.

"We've been here for a long time now, working hard and looking forward to the season," he added.

"To lead the team out is a bonus, and I can't wait to get the season underway and achieve something in League One."