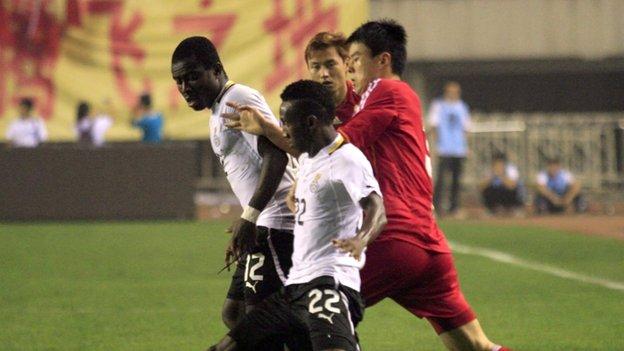 The Ghana Football Association has reached a cooperation deal with its Chinese counterpart to develop football in both countries.

The Ghanaian governing body will help China to develop its youth football.

In return the Asians, who are giants in women's football, will assist Ghana in boosting its female game.

Coaches, referees and administrators will also be involved in the agreement as both countries will exchange their experiences to mutual benefit.

The deal was reached on Wednesday when the Chinese Football Association leaders met GFA officials, led by president Kwesi Nyantakyi, in Xi'an.

"A team of officials from the Chinese FA led by the vice-president Mr Lin and the GFA had a meeting today and we looked at various areas of cooperation," Nyantakyi said.

"Apart from engagement between the two senior national teams, we agreed that we should look at some exchange of ideas in areas of women's football and youth football.

"We agreed that we should help them in youth football and they will help us in women football.

"The Chinese have a good pedigree in women's football and they have been world champions before and we have comparative advantage in youth football.

"Beyond that we will be looking at exchange programmes for coaches, referees and administrators for both countries."

China held Ghana to a 1-1 draw in a friendly played in Xi'an on Wednesday.