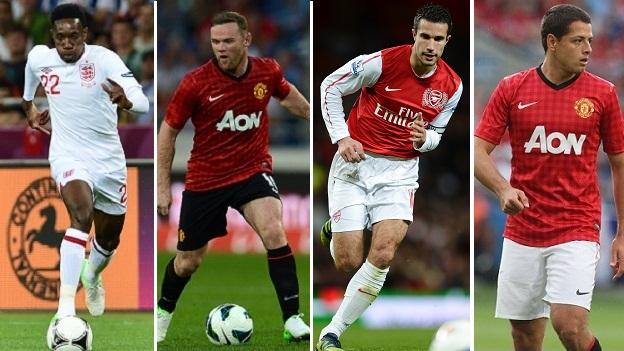 Sir Alex Ferguson believes the signing of Robin van Persie means he has a forward line close to matching his Treble-winning 1999 line-up.

Van Persie, 29, is expected to be in Manchester on Thursday afternoon to complete his £24m deal and could make his debut at Everton on Monday.

He said: "In 1999 I had Dwight Yorke, Andy Cole, Teddy Sheringham and Ole Gunnar Solskjaer, the four best strikers in Europe.

"We are going towards that now."

Ferguson's four front men in 1999 led them to a historic Treble success as they won the Premier League, Champions League and FA Cup in one season.

Van Persie's arrival at Old Trafford will give Ferguson an array of forward options, including linking the Dutchman with Rooney, combining the Premier League's top two scorers last season.

"They [Rooney and Van Persie] are two fantastic players and it will be great to have both of them," said Ferguson.

"It gives us more strength and more combinations up front.

"It is a fantastic collection of players and hopefully I pick the right combinations.

"It is great to have a player of Robin van Persie's qualities to come into the squad. I am very pleased."

The Netherlands international, who scored 44 goals in 57 games for club and country last season, maintained he would not discuss his future with Arsenal until after their final match of last season at West Brom on 12 May.

Van Persie then announced in July he would not extend his deal at Arsenal, which expires in June 2013.

He was the subject of bids from United, Manchester City and Juventus following his announcement.

All three offers fell short of Arsenal's valuation - they were reluctant to enter formal negotiations until a bid exceeded £20m, and hoped to hold out for £25-30m.

United, City and Juventus increased their offers but, of the three, United were the only side Van Persie would consider joining.

A compromise was finally reached with United on Wednesday evening and they will pay Arsenal £22.5m, with a further £1.5m one-off bonus to follow if they win a Premier League or Champions League title in the next four years.

Van Persie, who could be available for United's season opener against Everton on Monday, will undergo his medical on Thursday afternoon and hold talks with United chief executive David Gill.

"We hope all the things will be tied up, although sometimes medicals do take a bit longer. I am sure he will be available for Monday's game," added Ferguson, who was speaking at the launch of a new partnership with an online gaming group.

With Van Persie likely to be added to United's squad, Ferguson is hoping his side can regain the Premier League title which rivals City won in dramatic fashion last season.

Ferguson added: "Now it is about how we come back. We have shown in the past the mentality of the club and its history is that we always come back stronger.

"We want to give the fans what they expect and be battling at the top of the league.

"The gauntlet has been thrown down time and time again. It is up to us to pull in the right direction. We have to step up to the plate and produce. I am sure we will."