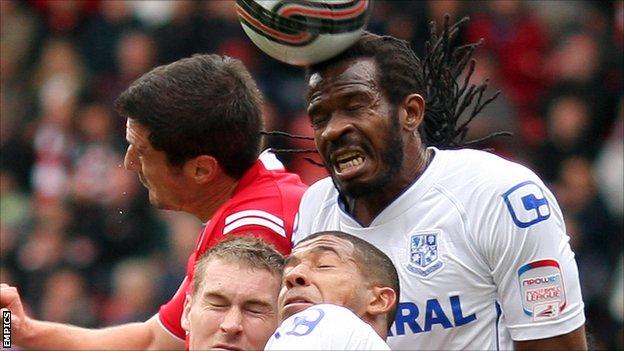 Tranmere's defensive injury problems have worsened with the news that Ian Goodison needs a knee operation.

Fellow defenders Paul Black and Mark McChrystal will also be missing for Tranmere's first League One fixture against Leyton Orient on Saturday.

"He's having the operation on Thursday night and we won't know how long for sure until the surgeon's had a look."

But Moore will welcome centre-half Ash Taylor and striker Jake Cassidy back into his squad, after both players featured for the Wales Under-21 side in midweek.

And the Tranmere boss is hoping loanee Ben Gibson can build on against Chesterfield on Tuesday.

"Ian has been massive for us and his injury is a major blow, but if Ben carries on with the sort of performance that he had the other night, then he'll be a ready-made replacement," added Moore.