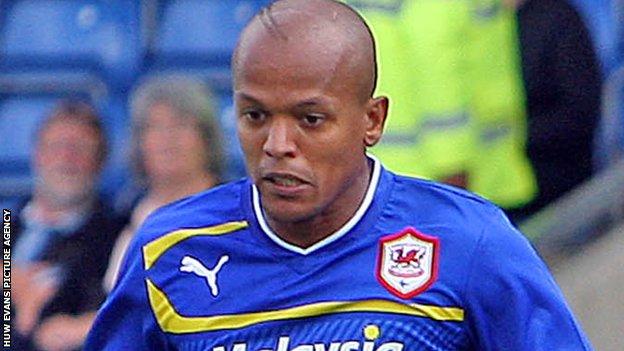 Wales striker Robert Earnshaw has reiterated his desire to remain at Cardiff City.

Earnshaw returned to Cardiff on a free from Nottingham Forest in July 2011 but was not a regular last season.

"Right now the main thing for me is to start the season and bang some goals in.

"Where my mentality is right now is I'm ready and focused and ready to play for Cardiff City."

As well as the summer acquisitions at his disposal, Cardiff manager Malky Mackay also has Rudy Gestede and Joe Mason as forward options this season.

But despite the intense competition at the club, 31-year-old Earnshaw insists he has still has plenty to offer the club.

"I've had a very good pre-season. I've been very pleased with my sharpness and how pre-season's gone," he said.

"I feel like I've got 20-25 goals in me and that's how I feel. After that it's whether the manager wants to pick me or not.

"I'll be working as hard as I can to try and get into it and to be part of it."

Earnshaw made a brief substitute's appearance late on in Wales' 2-0 friendly defeat to Bosnia-Hercegovina in Llanelli on Wednesday.

The former West Brom and Norwich player was a late call-up to the squad after West Ham midfielder Jack Collison withdrew.

"We weren't really at our game. We weren't doing what we should have been doing and the things we've been doing in the past that's made us a good team."