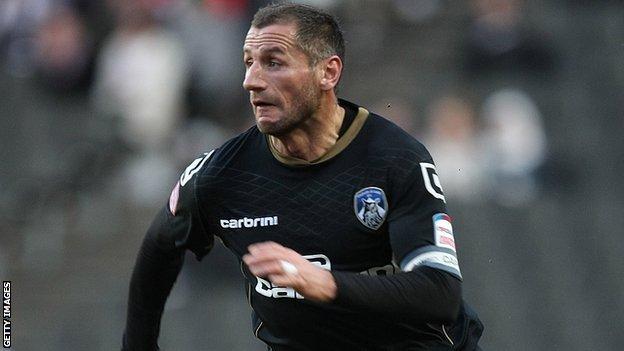 The 35-year-old has been capped 62 times for Finland and scored 11 goals for League One Oldham last season.

"With Shefki what you see is what you get," manager Pat Fenlon told the Edinburgh club's website.

"He is an old fashioned target man who can hold the ball up and get his head on the end of corners. He is a strong-minded player."

The striker, formerly of Ipswich, Swansea and Newcastle, watched Sunday's 1-1 draw with local rivals Hearts from the director's box at Easter Road.

And the Kosovo-born player was impressed by the derby atmosphere.

"That was my first taste of Scottish football," he said. "I was overwhelmed by the passion and enthusiasm shown by the Hibernian supporters.

"If the players and supporters can work together, then I believe we can enjoy some good times and I'm excited about the next challenge in my career."

Meanwhile, Lewis Stevenson will miss the next few weeks after suffering an injury to his big toe during the clash with Hearts.

Fenlon told the Hibs website: "We're not totally sure just how long exactly Lewie is going to be out for, but it will definitely be for a few weeks.

"Unfortunately there is a small fracture on his big toe and we will carefully manage him and monitor his progress."