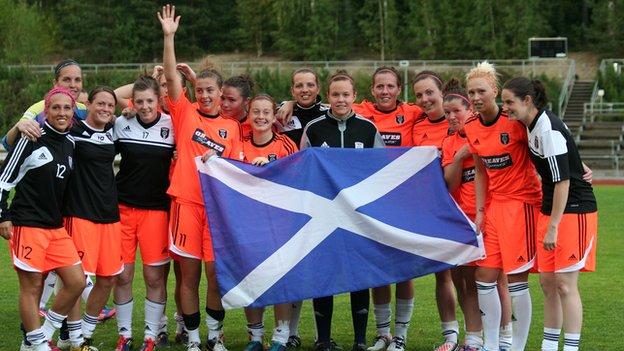 Glasgow City reached the last 32 of the Uefa Women's Champions League after a 1-1 draw with PK-35 confirmed the Scottish side as Group 8 winners.

Cynthia Uwak levelled for the Finnish side after Jane Ross's lobbed opener.

City's Leanne Ross had a penalty saved after Christie Murray had been fouled in the box but the Scots were not made to rue that miss.

They finish top of the section on goal difference and progress to the knock-out stages for the second year running.

Head coach Eddie Wolecki Black said: "We are delighted to be in the next round. This was our objective and we have achieved it.

"Probably the most pleasing thing for me is to see the girls so disappointed not to have won the game. They have set such high standards for themselves that topping the group isn't good enough for them, they wanted to win this match.

"I knew with 10 minutes to go a draw would see us through, but we were determined to remain true to our philosophy and we continued to push forward to win the match.

"Congratulations to everyone involved in the club on another great achievement."