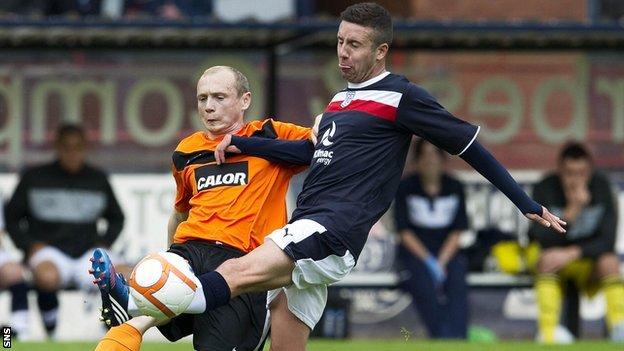 Dundee manager Barry Smith is excited by the return of the city derby with Dundee United, even though he regards his side as underdogs.

The Dens Park side visit United in Sunday's lunchtime kick-off.

"Derbies are different in that sometimes the ones that are expected to win don't," Smith told BBC Scotland.

"But, given where they've been in the Premier League last season, they will go in favourites and everyone is expecting them to win."

A pre-season meeting of the sides ended in a United win and Smith, a veteran of the fixture from his playing spell at Dundee, admits he would "love to be playing" in the first competitive Dundee derby in seven years.

"Everyone in the city's excited," he said. "It's great for the city to have the derby back, it's massive. For the fans it's great.

"There's a massive appetite for the derby in Dundee and it's been away for too long. Both sets of fans are desperate for it to come back and hopefully we can show that on the pitch.

"As a manager I've got to think it is only three points but, by the same token, I don't want to lose a derby.

"In the grander scheme of things, it's three points that we really want but, obviously, we want to win the derby."

Dundee are yet to score in the Scottish Premier League this term and injuries have added to Smith's frustration but he hopes his players can rise to the occasion on Sunday.

"[Injuries are] making it very difficult to get a team and also players on the bench that might change the game," Smith added.

"There are fine margins in the game and we have to learn quickly that we have to be better in terms of taking chances and also concentration at the back.

"Derbies are frantic, players don't need motivated for the derby games but I think the players that have the coollest heads on the park on Sunday will be the ones that stand out."