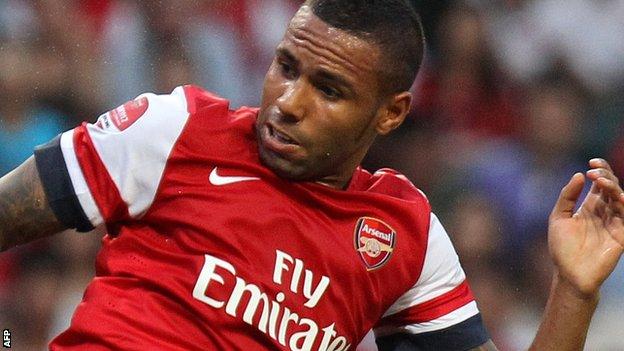 Swansea City have completed the signing of Arsenal's 21-year-old defender Kyle Bartley on a three-year deal.

Bartley, who made one senior appearance for the Gunners, has joined the Swans for a fee believed to be £1m.

"Swansea deal complete. Very happy. Was an extremely tough decision for me to leave Arsenal, but felt the time was right," Bartley said on Twitter.

"Was the toughest decision of my life. But it is a permanent deal. And I'm now raring to go with Swansea."

The centre-back signed a new contract with Arsenal last summer and has taken part in pre-season training with the team ahead of the 2012-13 campaign.

He began his career with Bolton Wanderers before joining Arsenal in July 2007.

An FA Cup Youth winner with the Gunners in 2009, Bartley made his first team debut the same year in a Champions League tie against Olympiakos.

The Stockport-born player spent two separate loan spells with Sheffield United during the 2009-10 and 2010-11 seasons.

The former England youth international spent a three-month loan spell at Glasgow Rangers in 2011 and also spent last season on loan at Ibrox.