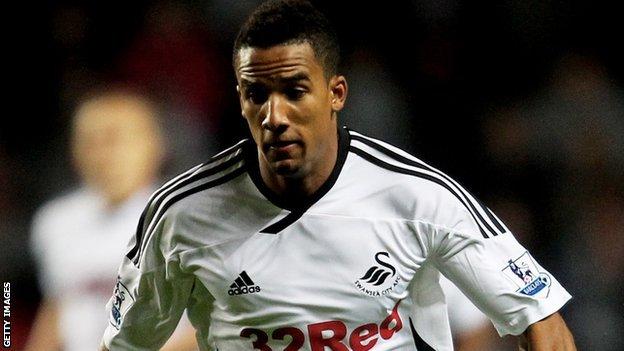 Swansea winger Scott Sinclair is refusing to sign a new contract at the Liberty Stadium.

The 23-year-old's current deal runs out at the end of the season and he is being linked with a move to Manchester City.

The Team GB player has informed Swansea chairman Huw Jenkins of his decision.

"I have spoken to Scott and he confirmed what he said to the chairman, that he won't sign a new contract," said manager Michael Laudrup.

"But he is here now and that's what important for me."

Sinclair came on a substitute and scored Swansea's fifth goal in their 5-0 victory at QPR on Saturday.

Laudrup accepts he may lose Sinclair before the transfer window closes at the end of the month.

"You never know what will happen tomorrow or the day after but there is no point arguing about it, we have to get on with it," said Laudrup. "Until 31 August anything can happen.

"Of course there is interest from a big club in Scott.

The Swans have also completed the signing of Arsenal's 21-year-old defender Kyle Bartley on a three-year deal.