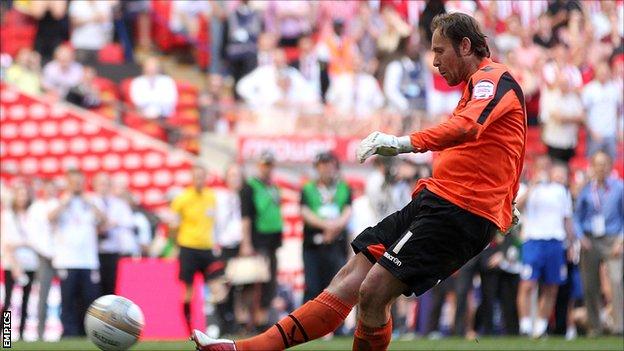 Steve Simonsen, the goalkeeper who missed the decisive penalty for Sheffield United in the League One play-off final, has joined Preston.

The 33-year-old was shortly after their defeat to Huddersfield Town at Wembley in May.

The former Tranmere, Everton and Stoke City man has signed a one-year deal and will provide competition for German goalkeeper Thorsten Stuckmann.

Sodje, who had a short spell playing in China after being released by Hibernian earlier this year, was the club's top goalscorer during pre-season.

Manager Graham Westley has been searching for a new goalkeeper since the departure of Richard Wright.

The former England international complained of homesickness and left Preston on 6 July, less than a week into his contract with the League One club.

Since then, Westley has had several goalkeepers on trial, including Peter Enckelman and ex-Port Vale player Stuart Tomlinson.

But the Preston boss has handed a contract to Simonsen, who described his Wembley penalty miss as the "lowest point of his career".

Simonsen told the club website: "It has been such a long summer since leaving Sheffield United.

"The way last season ended for me was heart-breaking. However, I know now what it takes for a team to enjoy a good season in League One and be promotion challengers."