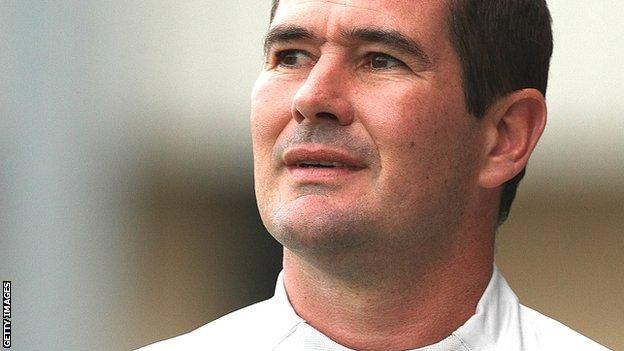 Derby County boss Nigel Clough has said he would like to add another striker to his squad as he tries to improve on last season's 12th-place finish.

The Rams are keen on Wigan's Conor Sammon but have so far been restricted to defensive and midfield signings and are resigned to losing Steve Davies.

Clough told BBC Radio Derby: "If we can get a striker in, it would help us out.

In two of their first three games, Derby face clubs recently relegated from the Premier League - Bolton and Wolves - and Clough acknowledges the strength of those sides.

He said: "It'll be interesting to see how they are. They've kept the majority of their players; kept their Premiership sides intact. So we'll be playing against two vastly experienced teams.

"[There is] that £12m parachute money for different teams who go up and down. There's going to be quite a few teams in the Championship who get this headstart with the parachute money and it is a huge advantage.

"The only way we can combat it is by bringing in good players like Paul Coutts for very small fees and producing our own like Will Hughes, who has been outstanding pre-season."

Leading the Rams out on the field this season will be new captain and summer capture from Coventry Richard Keogh.

The centre-back, who has taken over the armband in the wake of Shaun Barker's season-ending knee injury, told BBC East Midlands Today: "It's a massive honour to be named captain. I'm humbled by the [manager's decision] to do that.

"It's going to be a fantastic day for me personally. Hopefully, I'll be leading the team to a victory.

"There's a massive buzz. The fans have been waiting around all summer. They have a come down when the season finishes and keen to get back to supporting their team. And it's like that for the lads, too.

"Pre-season is about getting fitness and game time under your belt to make sure you're ready."