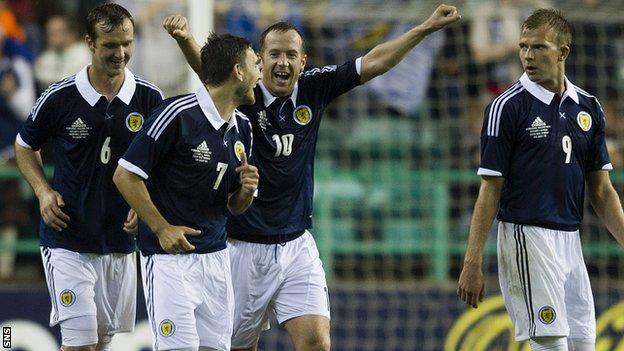 Scotland will meet Estonia in a friendly at Pittodrie on 6 February.

The fixture will be a warm-up for the World Cup qualifying games in March against Wales (home) and Serbia (away), with a June trip to Croatia to follow.

Scotland and Estonia, 43 and 46 on the Fifa rankings, have been drawn together in three previous qualifying campaigns, with the Scots unbeaten.

It will be the national team's first trip to Aberdeen since a 3-0 win over Faroe Islands in November 2010.

Estonia will be returning to the stadium for the first time since June 1993, when Pat Nevin (2) and Brian McClair gave Scotland a 3-1 World Cup qualifying win.

The last time the sides met, James McFadden scored in a 1-0 friendly win in Tallinn in May 2004.

Having beaten Australia 3-1 at Easter Road on Wednesday, Scotland coach Craig Levein said: "It is important that we continue to take the national team throughout the country and I am sure our huge support in the north east will turn up in numbers.

"Like our recent victory against Australia, the Estonians will provide a tough and relevant challenge at the midway point of our World Cup qualifying campaign.

"The Estonians have improved markedly in the last two years. They reached the play-offs for Euro 2012 against Republic of Ireland, and they will provide a good test."

Scotland open their bid to reach Brazil 2014 with a home double-header against Serbia and Macedonia next month before trips to Wales and Belgium in October.

The Belgian FA have confirmed that the 16 October match will be played at the King Baudouin Stadium, Brussels.