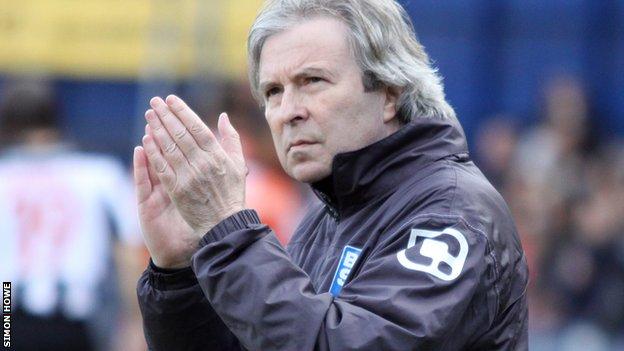 Manager Adie Britton is urging Bath City to "get back to where we think we belong" as the club once again prepare for life in Blue Square Bet South.

The Romans, who begin their season at Welling on Saturday, finished 23rd in the Blue Square Bet Premier last term.

But Britton has told BBC Radio Bristol he is targeting a return to that level within "the next season or two".

"If we can get off to a reasonable start confidence will grow from there," he said.

Bath have seen a large turnover of players during the summer and Britton feels this will benefit the club as they look to make an instant return to top tier of non-league football.

"We've kept about half the squad, so there's been quite a lot of change," Britton said.

"In those circumstances, for many of them the memories of relegation aren't there and the ones that remain are good characters and I know I can count on them."

Among the new recruits are Charlie Griffin from Forest Green Rovers and Josh Lowe from Cheltenham Town, who Britton is hoping will have a big impact.

"Josh is a seasoned professional and has played a lot of very good League football. We're very much looking to him," he said.

"Charlie has had a number of pro clubs and has been a prolific scorer over the years.

"That department was the major area we were lacking in last season. If we can add to the strikeforce then it's beginning to look really quite good.

"I think it's easy for people to say we're looking for consolidation. We'll be looking to do as well as we possibly can."