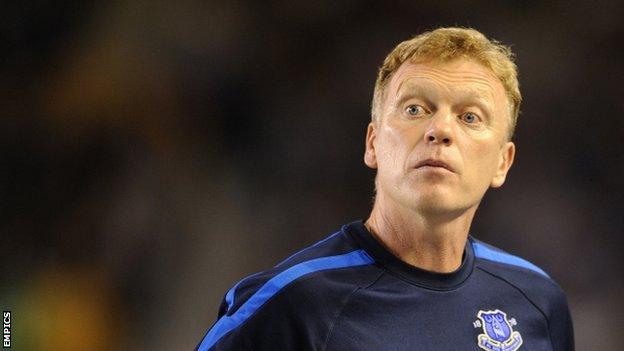 Everton manager David Moyes intends to use some of the funds raised from selling midfielder Jack Rodwell to Manchester City to improve his squad.

England Under-21 star Rodwell made a surprise switch to the Etihad Stadium last weekend in a £12m deal.

"It gives us a chance to do a little bit more business having raised the money," said Moyes, who is accustomed to working within a tight budget.

"Hopefully I will try to add to the squad before the season starts."

Rodwell is the third player to leave Goodison Park this summer, freeing up space on Moyes's wage bill as he prepares for Everton's opening game of the season against Manchester United on Monday night.

"Last year we had to sell, this year we didn't have to do it as we had already sold Tim Cahill and Joseph Yobo," he said.

"It wasn't a necessity to do it this year but I felt it was the right thing and gave us a chance to have a look around to see what we could do.

"We are out there actively trying to bring in another couple of players at least."

Moyes has already brought Steven Pienaar, 30, back to the club from Tottenham in a £4.5m transfer. The midfielder spent the second half of last season on loan at Goodison Park.

Everton originally sold him to the London club for £3m in January 2011.

"The Pienaar deal was needed for everyone," the Scot said. "The supporters needed it and certainly the players and the staff needed it. His performances last season were terrific.

"I couldn't turn around and say it was the best-ever financial deal or signing we have made. His age goes against him and we had to buy him back for more than we sold him but I think for everyone he was a key part to how we finished the season and did so well.

"I think everyone would agree it was imperative we got him back."