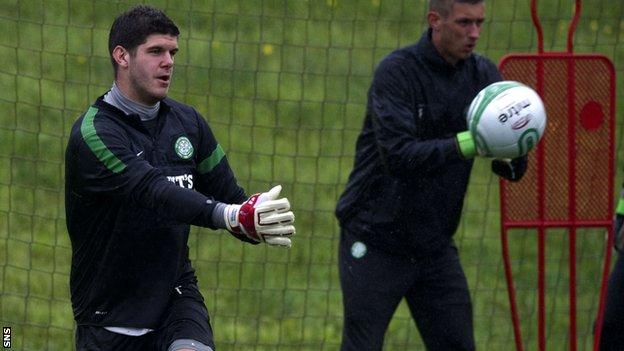 Neil Lennon is frustrated for Fraser Forster after Celtic's goalkeper was again overlooked by England despite new caps being handed out against Italy.

Birmingham City's Jack Butland and Norwich City's John Ruddy both played in the 2-1 win in Berne.

"I don't think England have a plethora of goalkeepers to choose from.

"And I do feel he is good enough to make the England squad and he has proven that in the last couple of years," Lennon said of Forster.

Forster spent two loan spells with Celtic from Newcastle United before making the switch permanent during the summer.

But, despite helping Celtic regain the Scottish Premier League title and playing in European competition for Celtic, the 24-year-old has yet to earn a call-up to England's international squad.

"I am frustrated for him," said Lennon, who had made Forster his main summer signing target in preference to Craig Gordon following the Scotland goalkeeper's injury problems and release by Sunderland.

"I think he is developing into a top-class goalkeeper.

"He has played in huge games and showed he had the character and qualities to play in those games."

Celtic face Helsingborgs on Tuesday in the first leg of their Champions League play-off and Lennon hopes that progressing to the group stages will help Forster attract the attention of England manager Roy Hodgson.

"We have to keep him going," said the Celtic manager.

"Obviously we have a big couple of weeks coming up and if we can get through to the Champions League group stages then it will give him a great platform to hopefully make that breakthrough."

Forster is also hoping that the exposure will help prove that he has a match for Butland, the 19-year-old playing in the Championship in England, and Ruddy, the 25-year-old who had a loan spell with Motherwell.

"There could be any reason," the Celtic goalkeeper said when asked why he thought he had been overlooked.

"But it can only help me if we get into the Champions League.

"That can only benefit me and progress me as a player.

"It's not my decision at the end of the day, but it is one of my ambitions, I have stated it clearly before.

"All I can do is play well for Celtic and keep knocking at the door."