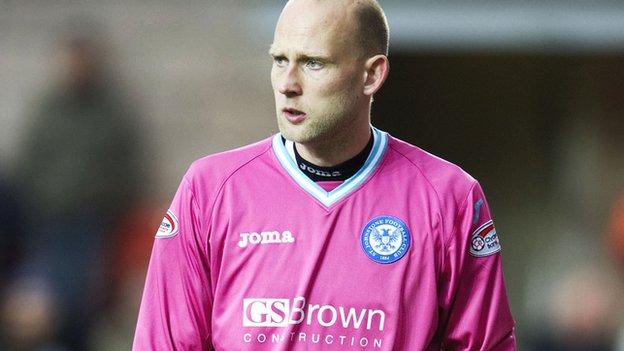 Hearts have turned to former St Johnstone number one Peter Enckelman to resolve their goalkeeping problems.

The Finnish 35-year-old, who was released by Saints this summer, has signed until January.

And he told Hearts' website: "I'm really excited to be back involved and coming to a club like Hearts is great."

It's been a long summer in the wrong terms

Mark Ridgers, who was second choice to Jamie MacDonald, has been ruled out for three months with an injury picked up playing for Scotland Under-21s.

And, as the Edinburgh side prepare to entertain Inverness Caledonian Thistle, MacDonald himself could be forced to withdraw his services for family reasons.

"That was one of the first things I heard about in the dressing-room - he is expecting his first child," said Enckelman. "I hope everything goes well for him.

"I'm always ready to step in. That's one of the good things with being slightly older.

"When you have got the experience behind you, that comes into play in these situations."

Enckelman, who has been capped 12 times by Finland, spent two seasons with St Johnstone after leaving Cardiff City.

He first arrived in the UK from hometown club TPS Turku, joining Aston Villa, for whom he made 67 appearances.

Villa sent Enckelman on loan to Blackburn Rovers in 2003 before he made a permanent switch to the Riversiders.

He fell out of favour with manager Steve Lomas at McDiarmid Park and did not play again for St Johnstone after a 5-1 defeat by Dundee United in February.

"The first time I even heard about this was less than 48 hours ago," said Enckelman.

"Yesterday, there were some contract talks and today it has been resolved, so I'm very happy.

"It's been a long summer in the wrong terms."