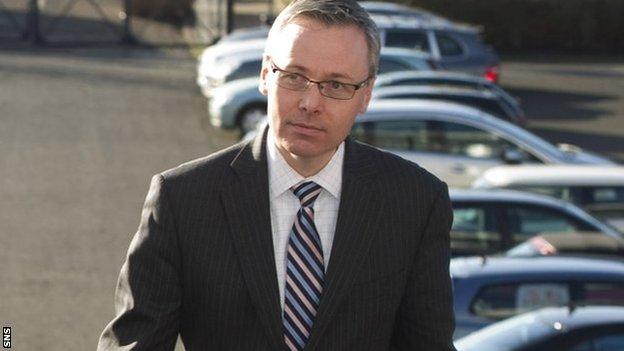 Scott Lindsay is to step down as Hibernian chief executive in September - six months after the Leith club announced his return to the role.

"Scott told us some time ago of his intention to leave," said a statement.

"But he agreed to stay on during the busy pre-season and transfer window and we are grateful to him for that."

Lindsay was a Hibs director between 2002 and 2005 and re-joined the Scottish Premier League club in 2007.

As part of a slimmed-down three-man executive team, Lindsay was to take responsibility for the commercial and communications operations from departing managing director Fife Hyland.

"Scott has made a great contribution to the club over the last five years," Hibs added.

"However it is 'business as usual' for now as Scott continues to lead our efforts to support the manager through the transfer window and into the regular season."

Lindsay did not reveal his reasons for leaving but thanked those he will leave behind at Easter Road.

"I have enjoyed my time with Hibernian immensely," he said.

"As a football fan, it has been an enormous privilege and honour to serve a club with the history and tradition of Hibernian.

"I'd like to thank all of my colleagues at the club who have contributed hugely and supported me greatly during my time.

"The dedication and commitment of those people working within the club has been remarkable; matched by the passion and desire for success of the club's supporters."