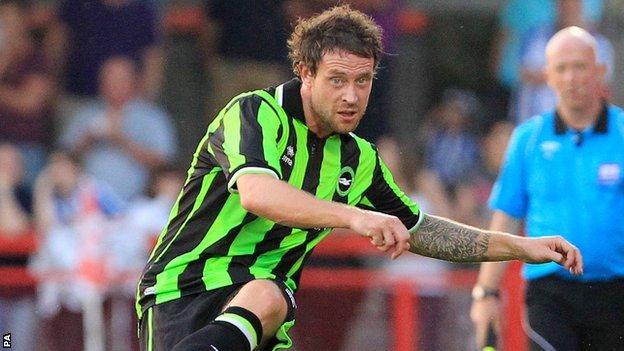 Craig Davies pulled one back from the penalty spot against his former club.

But a Craig Mackail-Smith double and a further strike from Barnes consigned Barnsley to a second straight defeat.

It was an emphatic way for Brighton to end a four-game goal drought stretching back to a 1-1 draw with Birmingham in April.

The deadlock was broken when Barnes picked up the scraps after Tykes keeper David Gonzalez spilled Craig Noone's free-kick.

And 32-year-old Bridge, on loan from Premier League champions Manchester City, doubled the lead with his first league goal since he scored for Chelsea in a 3-0 win over Portsmouth in December 2003.

Before this game, Wayne Bridge's last league goal came for Chelsea in December 2003. However, he netted against Arsenal in a Champions League tie in April 2004, and then found the net for England in a 6-1 win over Iceland in June 2004, before scoring against Wycombe in the Carling Cup in January 2007

Barnsley were handed a lifeline when Davies converted from the spot after Andrew Crofts brought down Jacob Mellis in the area.

But Mackail-Smith put the tie beyond doubt with strikes from a Bruno Saltor cross and a Noone centre, before Barnes finished the rout by firing in Kazenga LuaLua's cutback.

Brighton boss Gus Poyet: "We are much more aggressive and more dangerous going forward but we need to be solid as well. The key to it is to produce clean sheets.

"Everything went our way and Barnsley were the ones to pay. Unfortunately for Barnsley they paid the price, they were an unlucky team coming up against us because everything went in our favour."

Barnsley manager Keith Hill: "We had 12 players out but I have no excuses whatsoever. It was inept and I include myself in that.

"The opposition were excellent and it could have been up to 10-1. Hopefully we will learn and grow stronger."