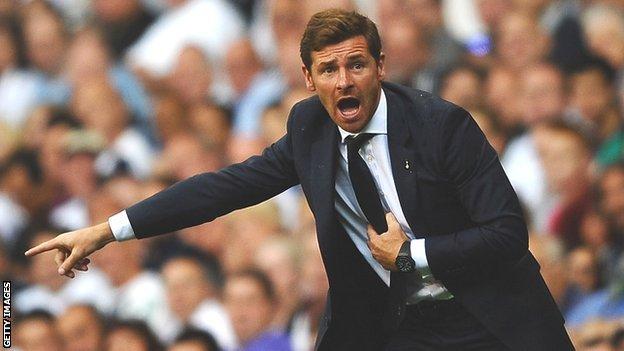 Benoit Assou-Ekotto's deflected 25-yard shot looked to have given Spurs victory with 15 minutes of the game remaining.

But the Baggies refused to give in and were rewarded when Morrison stroked home from 10 yards in the last minute.

It was a painful end to a frustrating afternoon for Spurs, who created more chances but were wasteful.

However, Steve Clarke's side will rightly point to their growing influence on the game as evidence of this being a very deserved point.

Villas-Boas can be forgiven for being sick of the sight of West Brom, who have played a significant - and largely antagonistic - role in the story of his time in England.

While the Portuguese's first win as Chelsea boss came over the Baggies, it was a defeat by Albion just over six months later that proved to be the last act of his Stamford Bridge 'project'.

Once again the Midlands club have thrown a spanner in the works to leave the 34-year-old with just three wins from his last 14 Premier League games.

However, there were many positives that Villas-Boas and the Spurs fans - some of whom remain doubtful of his appointment - can take away from this first home game of the season.

They fashioned the greater number of chances, their most potent attacking weapon, Gareth Bale, looks sharp and in Jan Vertonghen they have a centre-back who can grow into an authoritative presence in this division.

Within the first 15 minutes Bale had swung over two dangerous crosses - narrowly missed by team-mates - and sliced a shot wide of goal. He also provided a superb pull-back for Belgian Vertonghen to also fire wide.

This was all encouraging but what the home side needed was a goal and the longer they went without one, the more the crowd's nerves grew and West Brom increased as a presence in the match.

On the evidence of the first two games of this campaign, Steve Clarke - an old colleague of Villas-Boas under Jose Mourinho at Chelsea - is building superbly on the fine work done by predecessor Roy Hodgson at the Hawthorns.

Buoyed by their resilience to all that Spurs threw at them and by the introduction of Romelu Lukaku from the bench, the Baggies burst into attacking life and forced Brad Friedel into two superb saves - one from the on-loan Chelsea striker's angled shot and then from Marc-Antoine Fortune as he bundled into the box.

It was just after this that Tottenham scored, as Assou-Ekotto's long-range drive deflected off Graham Dorrans' head to beat Ben Foster and seemingly give Spurs the win.

However, such is the Baggies' spirit that they kept on attacking and, after hitting the bar during one mad scramble in the box, they capitalised during another, with Morrison finding space in the box to side-foot into the net after the ball had fallen invitingly at his feet. It was too late for Tottenham to respond.

So Clarke's West Brom tenure remains bathed in optimism, while Villas-Boas will be glad that it is another six months before he has to face the Baggies again.