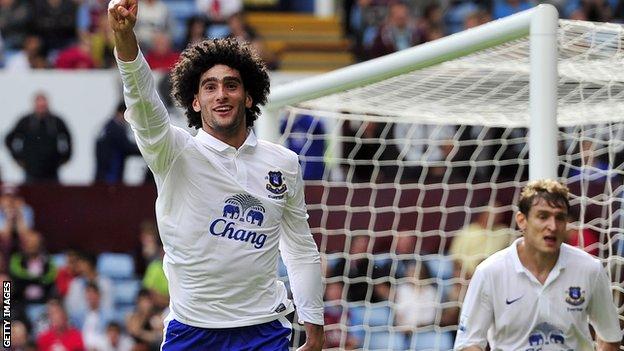 Pienaar's delightful 20-yard finish set Everton on their way and they doubled the lead after keeper Shay Given's mistake allowed Fellaini to score.

Everton added a third before half-time when Jelavic netted from close range.

Villa, who had Ciaran Clark sent off for a foul on Jelavic, grabbed a consolation through Karim El Ahmadi.

They finished 16th in the table back then, and another long season appears to be on the cards for the West Midlands club after Lambert saw his team outclassed and outfought by the determined visitors.

Lambert has been busy in the transfer market since his appointment - Villa signing Ron Vlaar, Matthew Lowton, Brett Holman and El Ahmadi during the summer.

But it is a case of new faces, same old story.

Ciaran Clark's red card was Aston Villa's first since Alan Hutton was given his marching orders in a 2-1 home defeat to Arsenal on 21 December 2011.

Even under the unpopular Alex McLeish, who lasted less than a year in charge before being replaced by Lambert in June, Villa took four points from the first two games last season.

Everton were everything Villa were not - bright, hungry, sharp and creative.

Not only did Fellaini score his second goal in as many games, Pienaar scored his first since re-signing from Tottenham last month, while Jelavic now has 10 goals in 15 Premier League appearances.

But there were telling contributions from Leighton Baines and Phil Neville, the full-backs eager to get forward at every opportunity to supply the ammunition for Fellaini, Pienaar and Jelavic.

There was only one winner once Pienaar opened the scoring with a stylish fourth-minute finish, a delightful 20-yard attempt beyond Given after Steven Naismith's clever lay-off.

Jelavic twice spurned good opportunities before Fellaini doubled the lead in the 32nd minute after Phil Jagielka's cross, Given allowing the ball to squirm past him when he should have done much better.

Villa managed just one shot on target in the first half - Barry Bannan testing Tim Howard - but Everton were already 3-0 ahead after Jelavic's 44th minute close range finish following good work by Baines.

It was damage limitation for Villa long before Clark was shown a straight red for bringing down Jelavic, and they were forced to play for more than half an hour with only 10 men.

Everton, who introduced new signing Kevin Mirallas from the substitutes' bench in the closing stages, were denied a fourth goal when Bent cleared off the line from Sylvain Distin.

But Villa finished strongly, El Ahmadi firing his new team's first goal of the season in the 75th minute with a curling finish before Andreas Weimann hit the post in injury time.