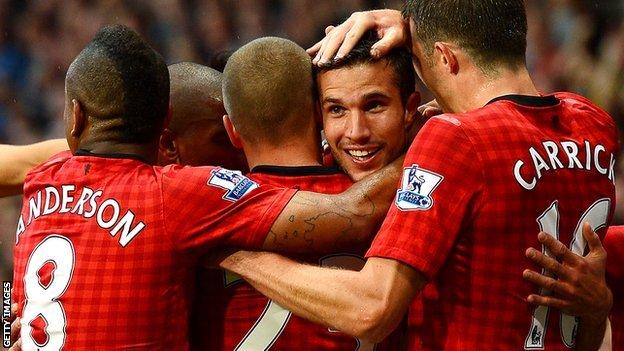 Robin van Persie crowned his full debut for Manchester United with a stunning first goal for his new club in a nervy win against Fulham.

The Dutchman's strike came after Damien Duff had given the visitors the lead, and it came in a scintillating first half as Shinji Kagawa and Rafael added further goals.

David De Gea turned Mladen Petric's point-blank effort on to the bar but the United keeper then failed to reach a Fulham cross as Nemanja Vidic deflected into his own net.

"Manchester United found that three goals were enough to win all three points in their first home game of the season. It very nearly wasn't so as Fulham threw everything at United."

And when it looked like United might throw away their advantage, the Spaniard stopped Moussa Dembele's close-range shot before the home side finally restored a measure of calm to the game.

A late injury to substitute Wayne Rooney and defensive worries aside, where Michael Carrick again had moments of alarm as a stand-in centre-back, Sir Alex Ferguson's side were dominant for large periods of the game and they could easily have scored more as Kagawa hit a post and Rafael had a second goal disallowed.

The successful introduction of Van Persie in an alternative 4-2-3-1 system left United fans purring about his attacking threat and he may have to play without Rooney in coming games, after the England striker suffered a nasty gash to his thigh following his introduction as a second-half substitute.

That worrying finish to the game, when Rooney was caught by Hugo Rodallega, was in contrast to a buoyant beginning after six-time Olympic sprint champion Usain Bolt was paraded to cheers of "Fergie, Fergie sign him up" before kick-off.

The party mood was punctured after three minutes, however, when Duff tucked in Bryan Ruiz's clever free-kick, although there were question marks about the hosts' marking.

The lull did not last long as the impressive Antonio Valencia probed down the right, and when Van Persie marked his full debut in stunning fashion there was a huge roar to blow away any thoughts of a spoiled occasion.

The Dutchman's goal came from the left when Patrice Evra crossed and Van Persie met it after one bounce with a superb strike into the opposite corner.

Martin Jol has come up against Sir Alex Ferguson nine times in the Premier League. Jol's teams drew the first two but have lost the last seven in a row.

It immediately put any minor queries about his role in the United attack to bed, and his link-up play with Kagawa just behind him showed signs of a more fluid system which could suit United in Europe.

The Japanese midfielder, a summer signing from Borussia Dortmund, then helped himself to a home debut goal on 35 minutes when he tucked in from close range after Mark Schwarzer saved Tom Cleverley's shot following a corner.

And it began a frantic 10 minutes before the break where Kagawa hit the post and Rafael had a goal disallowed for offside before the Brazilian full-back headed in Ashley Young's centre.

Fulham should have pulled one back moments later but somehow De Gea turned Petric's effort on to the bar, with Ruiz firing over from five yards.

Having established a two-goal cushion, United reduced their tempo after the interval but, similar to last season's 4-4 draw with Everton, which proved crucial in the eventual destination of the title, they carelessly let the Cottagers back into the game via a defensive howler.

There appeared to be no danger when Matthew Briggs crossed from the left but De Gea got the wrong side of Petric as Vidic inadvertently back-heeled into his own goal.

De Gea made amends for that clanger by saving twice from Dembele and he also stopped a late Ruiz header with Vidic also blocking Rodallega's shot.

And although United tested the Fulham goal further, they will hope their quartet of injured centre-backs - including Rio Ferdinand and Phil Jones - is back in action soon to shore up the defence.