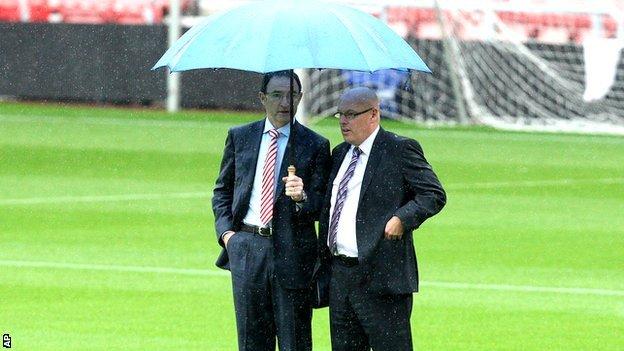 Sunderland's home game against Reading has been postponed due to a waterlogged pitch after torrential rain locally.

Referee Neil Swarbrick made the decision at 13:45 BST when forecasts suggested that the rain would not relent as the afternoon wore on.

Sunderland said the decision was made "despite attempts from club staff and officials to get the game to go ahead".

It was reported that both managers Martin O'Neill and Brian McDermott were in "full agreement" with the decision.

Sunderland chief executive Margaret Byrne said: "Naturally everyone is hugely disappointed that our opening game of the season could not go ahead as planned.

"I would like to express my sincere apologies to those fans, both home and away, who have travelled such distances to support their respective teams and had to go home disappointed.

"I would also like to thank the manager, players and officials from Reading FC for their understanding in this matter.

"The club has invested a significant sum into pitchworks over the summer months and we are confident that it is in first-class condition.

"We will, however, meet with our pitch consultants immediately to carry out a full analysis of today's events."

The postponement means Black Cats fans will have to wait for the debut of ┬Ż14m striker Steven Fletcher.

Winger Adam Johnson, signed from Manchester City on Friday, had been due to be presented to Sunderland supporters before kick-off.

The pair could feature in Tuesday night's League Cup game against Morecambe for their new club.

Reading fans who had already arrived at the Stadium of Light faced a 300-mile, five-and-a-half hour return journey without seeing a ball kicked.

The club tweeted its condolences: "Such a shame for our supporters - a massive thank you to all who travelled."

101 comments
Back to top
unknown