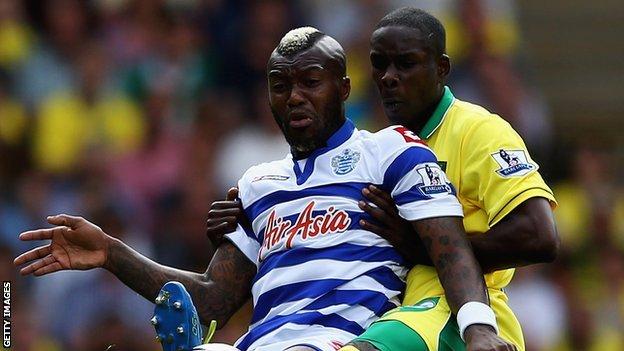 Norwich and QPR recovered from opening-day hammerings to register their first points of the season.

Simeon Jackson headed Norwich in front by finishing off a superb move.

QPR levelled when Djibril Cisse's penalty was saved by John Ruddy, only for Bobby Zamora to convert the rebound, even though he had encroached into the area when the kick was struck.

"After opening day embarrassment, a reshuffle in terms of formation and personnel made it more secure for these sides.

"But by and large it's a bit of respite for Mark Hughes and Chris Hughton."

Russell Martin's late header hit the QPR crossbar, but neither side were able to fashion a winning goal.

Both teams had a similar point to prove following respective 5-0 thumpings on the opening day of the season - away at Fulham for Norwich and at home to Swansea for QPR.

The response from Canaries boss Chris Hughton was to overhaul his back line, handing debuts to new signings Sebastien Bassong and Javier Garrido, and recalling Leon Barnett for his first appearance since February.

But it was a change at the other end of the pitch, with Jackson returning to partner Grant Holt up front, which proved decisive for the opening goal.

An intricate series of passes on the edge of the QPR area saw the ball find its way out wide to Anthony Pilkington, who clipped in a left-footed cross which was met by the head of Jackson from point-blank range.

Rangers boss Mark Hughes, who made only two changes, was equally rewarded by his decision to include Zamora alongside Cisse.

When Bassong and Cisse came together in the area, referee Mark Clattenburg's decision to award a penalty looked harsh, with the striker losing control of the ball before going down.

Cisse's resulting spot-kick was touched on to the post by Ruddy, only for Zamora to apply a finish to the rebound.

However, the twice-capped England international had clearly encroached into the penalty area when the kick was struck, leaving the Canaries doubly aggrieved.

QPR's biggest concern was Clint Hill's inability to get to grips with the power of Holt and it was no surprise that the centre-half, who had been booked for dragging down the Norwich forward, was substituted at half-time.

Hill's replacement Nedum Onuoha was immediately at the centre of the action, getting in a mix-up with keeper Robert Green, who seemed to handle the ball outside the area.

Neither the referee nor his assistant spotted it, however, and ex-Canaries keeper Green, returning to his former club for the first time since he left in 2006, was reprieved.

QPR's most likely source of a winner was the pace of Cisse, but his constant attempts to beat the Norwich offside trap were regularly met by a raised flag.

Norwich should have secured all three points, with Garrido crossing for Robert Snodgrass, who headed over, and the impressive Pilkington swinging in for Martin, who nodded on to the top of the bar.

Norwich manager Chris Hughton: "I'm quite sure their camp will say something different but it's a soft penalty. Cisse was stretching for the ball and his momentum would have taken him down anyway.

"I accept Seb didn't touch the ball. The double whammy is the penalty itself. On the referee's side Bobby Zamora is at least three yards in the box which gives him an advantage.

"We were hurting from last week and I expected a response. I thought we put in a performance that was worthy of a win."

QPR manager Mark Hughes: "I think the penalty decision was right. Norwich will think it's soft and I'd probably agree with that but there's definitely contact.

"[On Zamora's encroachment] there were probably three of ours encroaching and four of them so I think it evens itself out. [Referee] Mark Clattenburg made the right decision there.

"We showed good character after going behind. In terms of performance we know there's more to come from us."