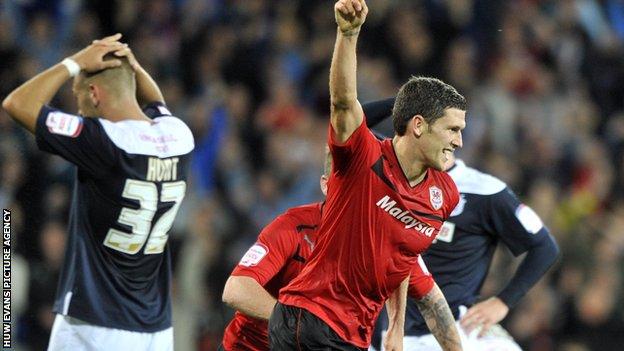 Goal-scoring captain Mark Hudson says there is much more to come from Cardiff City after their 1-0 Championship victory at home to Huddersfield Town on Friday.

Hudson claimed the winner in the 90th minute to give the Bluebirds a positive start to their campaign.

They secured the win but goalkeeper David Marshall was kept busy all night.

"We are just happy with the three points. We know we can play better than that," said Hudson.

Cardiff knew it would be a difficult opening game against a Huddersfield side returning to the Championship after a 12-year absence.

"They [Huddersfield] have come and sat in and tried to make it difficult. [It's the] first game of the season so it's always going to be difficult.

"He [Marshall] was brilliant. We know what he is capable of and to keep the clean sheet we relied on him a bit too much. But thankful he was on his game.

"[I was] just happy to be in position to get the goal. We are happy to get off the mark and get our season under way.

"[The] main aim is to get in the Premiership and get promoted, so to get the points on the board first game of the season is good. Long way to go."

Manager Malky Mackay was full of praise for Hudson's effort.

"He has been immense for me. He's my captain and he's someone I have a lot of belief in," he said.

"I keep on at him and Ben [Turner] to be up there scoring goals."

On Craig Bellamy's return to Cardiff colours Mackay said: "[He's] someone who puts 100% effort in every time he goes on to a pitch; [it was] not easy because they played a midfielder right in front of him and a full-back right behind him.

"So there was double marking, quite a lot. He showed the effort, the energy and the guile at times, real quality."